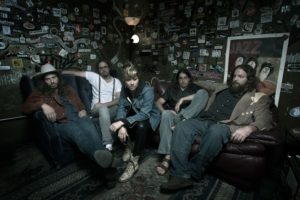 Years ago, we covered an independent feature film made in Fort Collins titled Whensday, a comedy that had it’s love of bicycling, beer and Colorado on its sleeve. This included it’s soundtrack, which was a best-hits of NoCo music circa 2013. However, one of the songs featured in the film, “Small Town Lights,” was created by an outfit originally from Wyoming, The Patti Fiasco. The five (man) band, lead by Alysia Kraft, have kind of become a fixture within the Fort Collins music scene, winning FoCoMA’s Best Front Person award in 2013, and have gotten to play alongside the likes of Charlie Musselwhite and Big Head Todd And The Monsters. And we now have their latest album, Saved By Rock And Roll.

The Patti Fiasco describes their output as “Americana,” a confluence of rock, country, blues and folk music. This is a modern rock and roll outfit that, at times, can have a bit of a country and blues tinge to their musicianship and a punk sensibility in their vocalist. Kraft can possess an edgy attitude in one song then bring on some warmth and emotion in the next. Backed up by guitarist/vocalist Dee Tyler, bassist Niles Mischke, drummer Peter Knudson and Ansel Foxley on his hand-built electric dobro, The Patti Fiasco delivers one of the more unique sounding rock albums we’ve heard. Saved By Rock And Roll has a small town friendliness and sense of fun baked into it that makes The Patti Fiasco sound like an awesome house band at a good dive bar somewhere in the Midwest.

This, in general, is a strong album that must be listened to from start to finish, preferably with a beer in hand. The Patti Fiasco will be playing at Bohemian Nights Festival in Fort Collins on Sunday, August 14; I’d recommend grabbing tickets for that show to see them live, and grab a copy of Saved By Rock And Roll. You will not be disappointed.