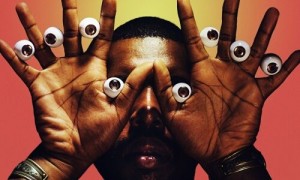 Flying Lotus (real name Steve Ellison) came from a musical background. As the great-nephew of the late jazz pianist Alice Coltrane and saxophonist John Coltrane, it quite literally was ingrained in his DNA. Music, however, wasn’t his first love.

Ellison’s family was supportive of his pursuit of art and other creative endeavors. Growing up in the Winnetka area of Los Angeles, he had an older cousin who was starting to make music at his house. He was like an older brother to the then 14-year-old Ellison.

“He had a computer back in the day, the old Apple IIC computer,” he says. “He was making music that was kind of trance meets metal, maybe like soul rock. It was trippy [laughs]. He had a little studio in his house and I would always go over there to play his video games, but he’d be playing music and showing me stuff. Eventually he was like, ‘Yo man, why don’t you make a track? Make some music.’ He would put these machines in front of me and eventually he saw I got kind of cool at it and he bought me one. It was on ever since.”

Despite his sudden love affair with music, he still wasn’t completely convinced that was his path. As soon as he graduated high school, he decided to attend film school after discovering filmmakers such as Wes Andersen, Quentin Tarantino and the Cohen brothers.

“I was really into films and was watching a lot of independent films,” he recalls. “That shit changed everything for me so I started pursuing that. I wanted to make movies. I really liked it, but it was such a strange art form. Going to school for it was really fucked up for me. I don’t know. It seemed like the right idea at the time.”

Ellison left film school, but not before linking up with a friend there named “Strange Loop.” He got Ellison back into making music and soon, Flying Lotus blossomed.

“That’s how it all happened,” he says. “I started making beats and stopped going to the History of Film class [laughs]. The music thing kind of took off by accident, well, not completely on accident, but I didn’t think it would ever be what it is.”

Collaborations with Erykah Badu, tracks with Kendrick Lamar and Snoop Dogg, dinner with Dr. Dre, working on Cartoon Network’s Adult Swim, and sold out shows with Nas have all happened.

“The weirdest thing for me and the most full circle thing was I got Snoop Dogg on my album,” he says. “That’s the coolest shit and I got to have dinner with Dre. I was getting drunk at the bar and getting all emotional. I was like, ‘Fuck that, don’t cry right now. Keep drinking [laughs].’

“It was weird,” he continues (albeit trepidatiously). “I haven’t really told anyone publicly this whole story. These are some things I kept to myself [pauses]. I met Dre and I almost cried, man. I was literally my 14-old-self again. I was seeing my kid self. It was weird. He was telling me his kids put him onto me [laughs]. That shit’s crazy to me. I was telling myself like, ‘This is too much. Just keep drinking’ [laughs].”

That career-defining moment still resonates with Ellison. It was a turning point, almost like a confirmation he had “made it,” although his music has always spoken for itself. While he’s often boxed into the hip-hop/electronic category, he’s evolved into much more and his music selections prove his vast sea of musical knowledge. As he began making a name for himself, people started coming out of the woodwork from the most unexpected places. Math rock band Battles invited him to play a festival in England, Mac Miller asked him to produce the track “SDS” off of his 2012 album Watching the Movies with the Sound Off and Erykah Badu came calling to co-direct her video for “Gone Baby, Don’t Be Long.” When working with a particular artist, Ellison only has one requirement—every collaboration has to happen organically.

“I never really try super hard to get an artist,” he says. “I don’t want to be that guy that’s always knocking on people’s doors. You know how it is. There are those people that are like, ‘Retweet me, retweet me. Check me out.’ I don’t want to be that guy. If it makes sense then I will try to pursue if I believe it to be a good idea, not because ‘oh this person’s hot right now. Let me try to get some notoriety by getting on a track with them.’”

Ellison’ last record, 2014’s You’re Dead, was nearly the antithesis of what to expect from a FlyLo record—it’s wild with the jazz influences. Perhaps it’s the touch of fellow jazz enthusiast Thundercat (Stephen Bruner) or remnants of Ellison’s ancestors creeping into his work; either way, it jumps out at the listener like a pack of exploding Black Cats.

“It all started off as kind of a joke with me and Thundercat,” he explains. “We always work on stuff. We’ve been listening to jazz a lot. We listen to George Duke, some crazy jazz. We’re like, ‘Let’s go there. Let’s do some other shit and just kill everything [laughs].’ So we just kept saying ‘oh you’re dead.’ That was the joke. Then we were like, ‘Wait, what’s the music going to be like?’ That’s when the record turned.

“At first it was going to be this complete jazz record, but I wanted more than that,” he says. “Then it became my record. It took its own shape. At the heart of all the songs, I wanted them to be death songs, I guess [laughs]. It revealed this journey and it felt like this progression, and what I imagined death to be like.

“I can feel when I have to make music,” he adds. “When that happens, it’s like a flurry of ideas; ten tracks will come out, or maybe more or less. It’s like a creative, energetic burst. That’s probably my favorite time of year. But literally I’m the happiest guy on the planet when I’m creating.”