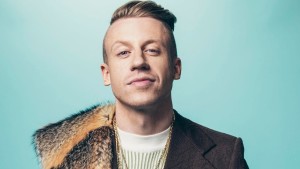 Only a handful of indie hip-hop artists have experienced the meteoric rise to fame Macklemore and Ryan Lewis have. From relative obscurity to the cover of Rolling Stone, the Seattle-based duo is deeply submerged in the spotlight. It’s all moving incredibly fast, but they are apparently enjoying the roller coaster ride. The pair’s latest album, This Unruly Mess I’ve Made, chronicles his growth as a husband and father while juggling the insanity that comes along with his new celebrity status.

Born Ben Haggerty in 1983, he grew up in Seattle and graduated from Evergreen State College in 2005 during which time he released his first EP, The Language of My World. But that’s where his career came to a screeching halt. Haggerty was struggling with a menacing drug addiction behind closed doors, which zapped his creativity. He cites 2005-2009 as years of very low production.

Macklemore’s live shows now swarm with people of all ages, race and gender. During his performances, he often addresses his personal struggles with addiction in the most genuine and sincere way ever witnessed at a hip-hop show. At a 2014 show in Omaha, Nebraska, he said, “A lot of rappers tell you that in order for them to be creative they have to be high or drunk. For me, it was the exact opposite. If I got high or drunk, my creativity would completely shut off. I went years back of forth of battling this and trying to get clean, but it was not working. Finally in 2008, for the first time in my life I went to rehab and I got sober. I came out of rehab and I had nothing I was broke. I moved back into my parent’s house.”

At that point in his life, he started making music again, this time with former tour photographer Ryan Lewis, who eventually became his producer. One day he was in Lewis’ parent’s basement (which ironically is a recurring theme in his life) and Lewis looped a Red Hot Chili Peppers’ song. He quickly wrote the lyrics to what would become the song, “The Other Side,” one of his most powerful songs.

“That’s probably the fastest song I’ve ever written,” he says. “I didn’t really have to think about writing that song. It just happened. Music is just kind of an outlet for me to kind of clean out the cobwebs and really go through whatever it is I’m going through emotionally on a piece of paper. That’s what music has always been for me in its purest form. That was definitely that song for me. It took me like 15 or 20 minutes to write the whole thing.”

Sadly, Haggerty suffered a relapse in December 2011 after returning home from tour. Anyone who has struggled with addiction knows what a devastating blow this is, especially when you want nothing more to stay clean.

“Initially getting sober, I went to a treatment facility and there I was able to get perspective on the broader scheme of life and realize that there’s something greater than myself,” he says. “I had lost any contact with God or power greater than myself during the time I was using drugs and alcohol. I don’t consider myself a religious person at all, but I do consider myself a person that believes that there is something greater than us out there. Getting back into a sober mind state, I got in touch with something I lost a long time ago. I was able to realize I had a certain amount of control but I don’t in the same sense. I have the ability to choose whether I’m using drugs and alcohol yet all these things that are happening to me are false. I could choose them or I can just going against them. I used drugs and alcohol as a numbing device. The minute that I lost the desire to numb myself was the most essential tool of the tool belt.”

Thankfully he was armed with these tools because the relapse could have easily derailed him completely, but instead, he forged ahead, started over and released 2012’s The Heist, which catapulted him to international recognition. The album debuted at number 1 on iTunes within hours of being released without any major label support.

“It’s a lot of hard work and a lot of sacrifice to put into the art,” he says.” It’s nice to see it take off in a new way on the level that it’s at right now.”

That’s an understatement. One thing, however, has seemingly remained the same, which is his authenticity. While his hit single, “Thrift Shop,” was the track that more or less got the ball rolling, there’s much more to him than a silly, albeit catchy, song about used clothing.

The small amounts of talking he usually does in between songs paints an accurate picture of who Ben Haggerty really is underneath the fur coats and ‘coon hats. He knows there is a balance. While he stays true to his sobriety and the messages he puts out into the world, he knows it’s not for everyone.

“If you’re at that point in your life where you’re drinking and drugging and that’s who you are and what you stand for, that’s what is going to reflect in your music,” he explains. “Schoolboy Q, Danny Brown and A$AP Rocky are all my friends, but they talk about sippin’ lean or smoking weed and taking pills. They have their own spin on drug culture, but that’s what they do. To be like, ‘you know what, you guys shouldn’t rap about this.’ I’m not in a position to say that. What makes me frustrated is seeing people that don’t drink or smoke who rap about it and glorify it and try to make money off of it because it’s popular. I want to be as genuine and authentic as possible.”