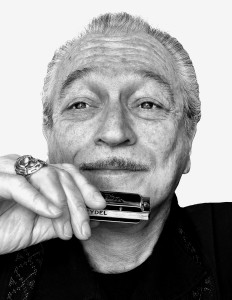 Born in Kosciusko, Mississippi. Charlie Musselwhite was exposed to music early on in his life. His father played guitar and harmonica, his mother played piano and one of his relatives was a bonafide one-man band. When he was 3-years-old, Musselwhite moved to Memphis. At the time, Memphis was experiencing the period when rockabilly, western swing, and electric blues and other forms of African-American music forged together to birth rock and roll.

Much like the blues songs he writes, Musselwhite left Memphis in pursuit of the rumored “big-paying factory jobs” up the “Hillbilly Highway” to Chicago, where he continued his education on the South Side, making the acquaintance of blues legends like Muddy Waters, Buddy Guy and Howlin’ Wolf.

While studying under the tutelage of his contemporaries, Musselwhite lived in the basement of Jazz Record Mart with Big Joe Williams, working as a driver for an exterminator.

During the ‘60s, he spent his time hanging out at the Jazz Record Mart and a nearby bar, Mr. Joe’s, with his fellow musicians, playing for tips at other clubs around the city. He forged a lifelong friendship with John Lee Hooker, who served as best man at Musselwhite’s third marriage. Gradually, Musselwhite became a household name.

Since then, Musselwhite has released over 20 albums, including 1970’s Memphis, Tennessee, 1984’s Where Have All the Good Times Gone? and his most recent, I Ain’t Lying, which was released in 2015. Interestingly enough, he also performed on Tom Waits’s Mule Variations and INXS’s “Suicide Blonde.”

With 14 W. C. Handy Awards, six Grammy nominations, Lifetime Achievement Awards from the Monterey Blues Festival and the San Javier Jazz Festival and the Mississippi Governor’s Award for Excellence in the Arts under his belt, he’s earned his place among the upper echelon of blues musicians.

BandWagon Magazine: What drew you to Blues?

Charlie Musselwhite: Well, I heard all kinds of music growing up I liked like gospel and old hillbilly stuff, but blues to me sounded like I felt. That’s the short answer (laughs). It was a comforter, it made me feel good. I was kind of a lonely kid, I didn’t have any brothers or sisters and I had a single mom who worked all the time. I was alone a lot.

BW: When did you know you were going to play music for a living?

CM: I’m still working on that (laughs). I guess when my first album came out and I started getting calls from around the country to come and work, it made it kinda real. But i hadn’t really taken it that seriously before that, because I loved the music but I never thought I would make a living at it. I was working in these tiny blues clubs in Chicago but it wasn’t enough money to live on, everyone had to have day jobs. I was just getting by. I didn’t know where it was going to go but I loved the music and I felt compelled to play it.

BW: What was your experience like performing at the White House in 2013?

CM: It was awesome to be in the White House. It was a tribute to the music of Memphis as I recall, and so there were a lot of old friends there, and it was fun to be there with them and play with them, what a thrill. I had met President Obama already and I had given him a harmonica. I told him, ‘I heard you like blues, if you have want some lessons I’d be happy to give them to you,’ and he said ‘that’s great Charlie but I’m a little busy right now.’ (laughs)

BW: What are some of your favorite places to play?

CM: Home (laughs). Every place has something unique to offer. Not all those people can come to my house so it’s great to get out and see all the smiling faces and people dancing it’s really rewarding.

BW: How did your relationship with Ben Harper begin?

CM: We first met when he opened for John Lee Hooker a long time ago. John Lee would call me from time to time to sit in with him all the time so I was there. Not long after that John was in the studio and each tune would have a different band on it. He asked Ben and his band to back him up and have me on harmonica. At this point Ben and I knew each other but we had never really played together. But we really locked in there in the studio and decided we needed really ought to do more things together.

BW: When you’re not touring how do you like to spend your time?

CM: Oh, catching up. I’m gone so much there’s a lot of stuff that needs doing around the house. Just fixing stuff and cleaning stuff. And seeing friends and reading and relaxing. Sitting in the yard watching the clouds go by. When you’re sitting there staring out the window that’s an artist at work. That’s when you get ideas.

BW: Is there any advice you would give young musicians?

CM: I say follow your heart. Play what you want to play, don’t try to play like someone else. It’s great to learn from other players but you really want to play your own music. Play your own heart.