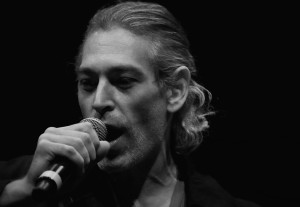 By 2006, Matisyahu (real name Matthew Miller) had experienced a meteoric rise to fame. The live version of “King Without a Crown” had broken into the Modern Rock Top 10 and he was named the Top Reggae Artist by Billboard that same year. With his roots firmly planted in his Jewish heritage, the fact he was a Hasidic reggae artist became his whole persona. Not surprisingly, when he shaved off his infamous beard in 2011, a lot of people were shocked.

“It was more than facial hair,” Miller explains. “It was my whole identity. My whole identity was connected to this beard and this look, and this Hasidic thing. It would be like if Bob Marley shaved his dreadlocks. People would be like, ‘How could he do that? He’s a Rastafarian.’ That’s what makes him, to some extent, who he is. Real fans or any person with half a brain would say, ‘He is who he is and people change. His music is really what matters.’ People have a hard time separating the music from the identity.”

It took a lot of growing for the Pennsylvania native to figure out who he is, and in many ways, he’s still working on that. Born in West Chester, his family moved to White Plains, New York when he was a kid. He spent his childhood learning about Judaism, but as most teenagers do, he eventually rebelled against his strict upbringing. Music, however, was always a constant in the Miller household and eventually gave him a sense of purpose.

“Music was a big part of my life growing up,” he says. “My parents had great taste in music. I always felt music was exciting for me. As a kid, I liked to perform and be in choruses. When I was in about 5th grade, the chorus were kind of segregated. There was the Performing Arts Choir, which was mostly white kids doing chorus music I really didn’t like. Then there was the Cultural Horizons Choir, which was mostly the poor Black kids from the projects and they were doing gospel music. I was always more interested in that.”

He joined Cultural Horizons and was the only white kid, which he says was the first difficult experience that made him feel like he didn’t fit in. When he would hear the young Black girls singing, however, it moved him inside. It wouldn’t be the first time music touched his soul.

“I felt I could do that,” he says. “When I was getting into my own music and reggae, there was this summer or fall when I was living in Burlington, Vermont, sleeping in the park, and there was a guy who was singing the ‘Rastman Chant.’ The same thing kind of happened. It moved me and I felt like I could do that, too, so I started singing that song.”

When Miller was 16, he saw Phish in Massachusetts and had an intense psychedelic experience, another monumental event.

“It wasn’t about watching the performer,” he remembers. “It was a fully encompassing experience, where you felt like it wasn’t about being impressed by the skills of the musician or being moved by them, but more that you entered into an atmosphere or a space, and they kind of took you on journey through different rooms in a house. In these rooms, you were able to explore yourself. At that point, I felt that my true love was music. That was when I could really find myself.”

Throughout all of his evolutionary changes, one thing remained constant—his passion for creating. After 2006’s breakthrough album, Youth, Miller followed up with 2009’s Light, 2012’s Spark Seeker, and 2014’s Akeda. In between albums, he found time to appear in two films, 2010’s A Buddy Story and 2012’s The Possession.

“When I was 18, I was in a play called ‘Equus’ in a theater in Central Oregon,” he recalls. “I was going to see which road opened up for me—acting or music.”

The road soon led to music. Miller returned to New York, where he attended to The New School and took a lot of acting classes, but continued to work music himself. Eventually, he stopped doing both to focus on religion and spiritually, although after a couple of years, he returned to music. “That door opened up so I ran with it,” he says.

In 2016, Miller is focused on raising his three boys—ages 10, 9 and 5—while doing shows (he’s going out with 311 again this summer), carpooling to hockey or soccer practices, and riding motorcycles with his father. While he doesn’t claim to be a spiritual guru of any kind and his face is still freshly shaven, there’s a sense he’s found a peace only a higher power could provide.

“Spirituality means a lot of different things to different people,” he says. “It’s nothing you can define or give a prescription for. Today my music is about putting together the right band and right musicians, and having the right focus; allowing music to be a lot of improvisation and exploration to create this space for people to enter into it. It’s less about me and more about environment I am trying to create with music. That’s the drive for me.”