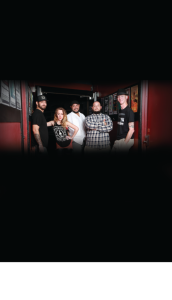 Bastard Suns vocalist Clay Hiers fell in love with early skateboard graphics at a young age. Like most kids growing up in the ‘80s and ‘90s, he was passionate about skateboarding and music, particularly punk rock. Living in Atlanta, however, didn’t offer too many options in terms of rock music. After all, the “Dirty Dirty” is renowned for its hip-hop/rap scene. That didn’t stop the ambitious art student. In 2006, he met the members of what would become Bastard Suns.

Currently, the lineup consists of Hiers, guitarist Wes Driscoll, bassist Manny Munoz, drummer Tonka Green and vocalist Whitney Carite, adding a female element to the previously all-boys club. As Hiers describes, “Our current sound is a product of years of refining and reproducing the things we all truly loved about music.”

Bastard Suns are hitting the road partly in support of legendary ska band The English Beat and make a stop in Greeley Tuesday, April 19. Hiers took some time in between soundchecks to talk Powell Peralta, comparisons to Sublime and why he’s a “bastard sun.”

BandWagon Magazine: Who came up with the name Bastard Suns?

Clay Hiers: There are two answers to that question: the PC version is that we are the “Bastard Suns of rock and reggae.” But the actual phrase comes from my younger, wilder days. We lived in a beautiful place near the beach, but we were partying so hard that the sunlight and a beautiful day was no longer welcome, and the “Bastard Sun” became a euphemism for staying up all night. I named the band that to remind myself of what’s truly important in life, and also what isn’t.

I understand Powell Peralta was a big influence on your graphic design style. What do you like about old skateboard graphics?

One of my first revelations was seeing the Powell Vallely elephant graphic at 12-years-old and thinking, “That’s what I want to do. I want to make art for cool people and their equipment.” That led me to art school in Atlanta, which subsequently led to the formation of the band. I owe a lot to old school skateboard art. Plus, there’s the punk rock aspect. I heard Descendants for the first time on a Christian Hosoi video. The work ethic and attitude was great back then. Athletes, artists and bands were trying to do new things, not just trying to accumulate money and Facebook likes.

Do you still do graphic design?

I do a lot of freelance work, as well as all of the design for the Bastards. It’s a hell of a lot of work, but it allows me to have a great deal of control over my band’s aesthetic and the quality of the product.

Atlanta is known for its rap scene. What was it like being a rock band down south?

Most of us live on the East Coast of Florida now, but coming up in Atlanta was a great experience. There was very little interest in rock music at all, which drove us to work extra hard. We built up a pretty great following—something rare for a punk-ish band in the Dirty Dirty.

I love The English Beat. How excited are you to be opening for them?

I’m incredibly excited about this. They’ve been a favorite of the band since we opened for them and 311 back in 2007. Oddly enough, our booking manager and close friend was their guitarist for quite a while, and we probably have him to thank more than anyone. Really stoked though, we’ve never managed to play San Francisco either, so double-bonus.

Have you always had a female element to the band? How has that changed the dynamic of the group?

We’ve always had special guest appearances by female vocalists, but it wasn’t until we lost our bassist/backup singer that I had to go looking for someone to sing my harmonies. We asked my fiancée Whitney Carite if she could fill in for a show or two and the reaction was so great, we decided to make her an official member. It’s been one of the best decisions we’ve made and it’s also fun for me to write for a second female vocal.

Do you get comparisons to Sublime and other bands of that nature? How do you feel about those comparisons?

We do and I’m fine with it. Sublime showed me that it was ok to like most music and that it was ok to play a lot of different genres. I think most of today’s new age reggae bands are influenced heavily by Sublime. But they only got half of the message. The punk and hip-hop influences were what struck me and I owe that band a debt of gratitude for that.

What do you look forward to most about being on the road?

Freedom. We don’t make much, but then again we don’t cost much. Who else gets to see the whole nation and party with everyone, and then gets paid for it? I also look forward to seeing all of our good friends across the country and rocking their collective socks off. And I look forward to making great music with our amazing band.