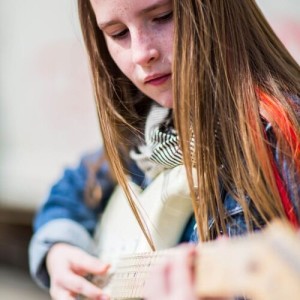 While BandWagon covers any and all music thrown our way, we have never heard any work from a child artist up until now. So when Grace Kuch, a 12-year-old blues singer from Fort Collins, approached me during a Symbols concert last month with her debut album, I had to give it a go.

According to her website, Kuch has been playing original music at various blues festivals across Colorado since 2015, including Greeley’s Blues Jam, making her the youngest performer at the annual event. She has also attended various music camps and blues festivals in places ranging from the Catskills to Las Vegas, and her time on the road, rubbing elbows with other artists, shows in her self titled debut.

It’s a four-track EP consisting of covers of Etta James’ “Blues is my Business,” Elmore James’ ”It hurts me too,” Don Nix’s “Going Down” and Booker T and The MGs’ “Green Onions.” Those that have seen The Sandlot will remember that “Green Onions” is an instrumental piece, so Kuch’s cover of it shows off her skills as a guitarist. Backing her up on bass and organ are Mer Sal and Jasco from The Symbols, respectively, with Ika Peleko on the drums.

Kuch is incredibly talented for her age, and possesses her own distinctive style. Her cover of “Green Onions” is not the more minimalist organ-and-guitar style the original is known for – she employs Peleko, Jasco, and Sal on the track in their respective bits – but it is still recognizable as Booker T’s classic.  The rest of her covers are good, though her youth shows on “Blues is my Business;” her pronunciation of “Blues” sounds like “Booze” at first, which gave me pause at first until I remembered the name of the song on the CD case.
Kuch is definitely a rising talent within Colorado’s local blues scene; I do hope she plays at this year’s Blues Jam. For those that want to track down her album or learn more about her, visit http://www.gracekuchmusic.com.