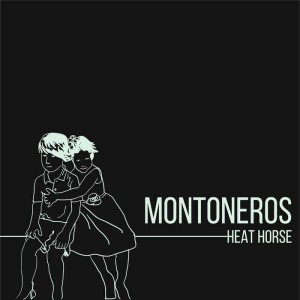 The latest offering from Montoneros, Heat Horse, is an exciting release which goes on a journey through many different and incredible musical elements. Recorded in Black and Bluhm Studios with Chris Fogel, the group was astonishingly able to record the entire EP in a single day. Don’t let this fast paced studio venture fool you; this EP is well thought out and the musicianship in these songs is undeniable.

“We spent around 10 weeks last fall recording home demos of the songs before heading to the studio. It helped us get a better sense of dynamics, tone, tempo and structure of the songs,” says frontman Gaston Leone. “The contrast between the demo experience and studio experience was stark; the demos process dragged, took a lot of time, effort, and thought. Yet the studio recording session flew by–we went in and knocked it out. Part of that was working with Chris. He kept us on task and helped us be more efficient.”

The unique qualities displayed in Heat Horse make Gaston’s words hard to dispute; each song is comprised of well calculated parts from each of the band members. The gentle yet concise guitar melodies at times seem to float atmospherically over the rhythm section, while maintaining a refined and clean tone. Balanced yet sporadic, they twist together and complement each other consistently through the EP. The bass leaves just the right amount of fullness while often times leaving intervals of hollowing space under the tracks. This accented the driving drums in Heat Horse well, displaying a groove throughout the EP which makes it almost impossible to listen through and not start head-bobbing.

”We are stoked to say that we have teamed up with a Boulder-based DIY label called First Base Tapes to release our new EP on cassette this April,” adds Leone. “This summer, we will be playing some festivals, both in Colorado and out-of-state. We are planning a tour for the late summer. And if all goes well, we will release more new music before the end of the year.” 2016 is shaping up to be quite the year for Montoneros. What this year holds for this indie-rock outfit is as invigorating as the recent release of Heat Horse, and leaves the band’s future wide open.