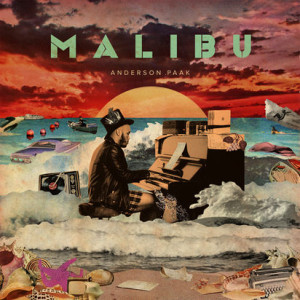 When Kendrick Lamar released the first single for what would soon be To Pimp A Butterfly, “i,” my reaction was less than thrilled, fearing its toe tapping pop hook was a sign of things to come. In the case of the sophomore release from Anderson Paak, listening to the listless synths of “The Season / Carry Me” out of context from the album as a whole left me feeling much the same. Luckily, in both cases, I was wrong. But such is the danger when judging an album by its singles. In Under Pressure, Logic says that “making a single before your album is like putting together a trailer for a movie you have yet to shoot.” Paak clearly agrees, with his lead single keeping the cards very close to chest.

Growing up in Oxnard, California, Paak came to music early in life, playing drums for the church his family attended. He began producing as a teenager, releasing his first solo effort a little later while on tour with American Idol contestant Haley Reinhart under the pseudonym Breezy Lovejoy. After releasing the second and last album as Breezy Lovejoy, Paak released Venice in 2012, a vivid trap, filled with lusty lyrics and quick beats. Malibu marks the first solo effort from Paak in a little over 2 years, a collaborative EP with Knxwledge and roiling features on half of Dr. Dre’s Compton bridging the gap in between. If you think his work with Dre might influence the content following, you’d be right. Equal parts illustrious and excessive, genuine and humble, Malibu builds on the boozy charm of Paak’s debut, Venice, doubling down on atmosphere and lush, live instrumentation.

Expecting a rowdy radio banger, I was surprised (and overjoyed) to be greeted by a sultry sonic safari, breezy funk roaming freely over the ambient expanse. “The Bird” plays like the opening fanfare to some psychedelic stage production. While it’s predecessor (though thoroughly enjoyable) often felt cluttered under the weight of over zealous electronic sonic palette, Paak takes special care to keep his soundscape broad, not only in influence, but in scope. Evident throughout, it might be best displayed in the cavernous “Heart Don’t Stand a Chance.” In the first moments of the track, one could be forgiven for a moment of vertigo, falling through a cyclone of blustering percussion and keys. The entire record has an inherent movement, as if the instruments dance with their player. “Parking Lot” begins with flittering strings, and gives way to one of the more rousing rhythms on the record. The tune would fit just as well in a Kohl’s commercial as it would as the soundtrack to spaceflight.

Beyond any critical examination, just as someone who loves music, I just fucking love this record, which may be the best sales pitch I could give, but I will say this. While young innovators drag hip-hop clawing and screaming out of the dreaded “Bling” era, and move us towards a more expressive, expansive genre, it would follow that the bustling beats and breezy vocals of the R&B scene would proceed it. Paak (and other artists like Frank Ocean or Miguel) capitalize on this disturbance perfectly, evoking modern day hip hop producers, while playing with a old school palette. “Come Down” plays like an LL Cool J track produced by Neptunes-era Pharell, riding rails made of 808’s and a bass line that is begging for a fight. Paak can occupy a combative headspace, and within the space of a couple minutes, dive head first into cool, sanguine optimism, like in “The Dreamer.” In a sample nestled between the final two tracks, the artist gives us his reckoning of his work: “I enjoy some of the old and I enjoy the new, and if I can find a balance between it, that’s where I find my satisfaction.”