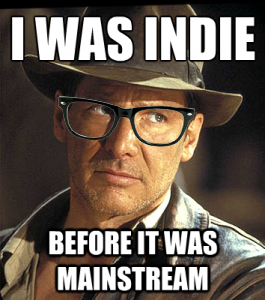 This is in all caps because it is the most important. When you go to shows and support your peers you are building a network of contacts and friends who will in turn support you as you prepare to have post reggae swing fusion sweep the nation. At shows you will make friends with people who have the same goals as you and you will gain valuable insight into your own craft by watching others. Yes, I know you’re probably socially awkward but it’s a local show so everyone is. Just be nice and try to tell a joke from time to time.

To get your foot in the door do the open mic thing then reach out to local promoters and venues to get that first gig at a place where your friends and family can all come because they will. Having your first show is like having a quinceanera, everyone shows up because they love you and it’s an excuse to party. They might not show up much after they hear you play, but they do appreciate that you put yourself out there. No one is expecting Prince’s performance from Purple Rain so just give it your best and book more shows to keep the momentum.

This doesn’t mean go blow five grand on two songs at a professional studio because your post reggae swing fusion band isn’t ready for the studio. If you keep up on steps one and two you will probably meet someone who will help you get a demo for cheap. It doesn’t have to be great it just needs to be a general representation of your sound. Along with some basic social media, this will help promoters outside your region to decide how little they want to pay you.

Let’s face it, you suck. Post reggae swing fusion sucks. I don’t even know what it sounds like, but I do know it sounds like a bad idea. Those songs you demoed for cheap probably suck and you’ll hate them after you’ve heard them three times and you wrote the songs. All the other bands in your scene suck too but worst of all, your band sucks more than they do. But that’s for a reason, because all those other bands have been doing it longer than you. So don’t get discouraged because everyone sucks when they start. Crew Rienstra of the LA-based band Bones Muhroni said it best in our recent interview that if you spend time comparing yourself to other bands “your head will literally explode. I’ve seen it happen.” Just accept your fate. Knowing that you suck is a huge relief because at least you’re not in denial anymore. Then you can focus on improving your weak points and begin making the music you want to make.