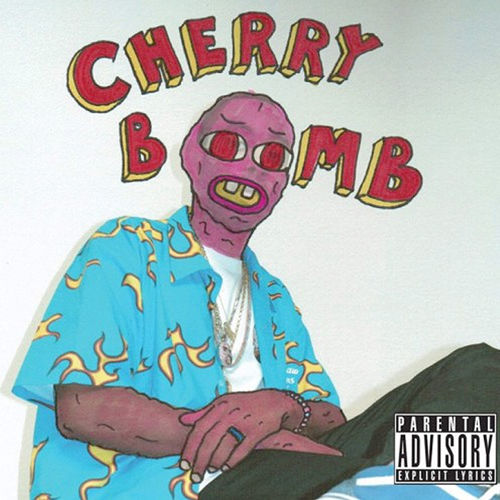 24 year old rapper/producer/writer, and founding member of the Odd Future hiphop collective, Tyler, The Creator is without a doubt, one of hip hop’s most controversial figures. Exploding onto people’s desktops with the infamous “Yonkers” music video, Tyler would go on to release two albums full of the pervasive, bludgeoned horror-core he would come to be known for, Yonkers and Bastard. Though in 2013, with the release of Wolf, Tyler dropped the horror-core facade, in favor of a jazzier, more main-stream sound that capitalized on the snot-nosed braggadocio Odd Future does so well, while still leaving room for the best storytelling we’ve received from the rapper so far. As big of a departure as Wolf was, Cherry Bomb is from Wolf.

In a 2014 interview with Larry King, Tyler confessed that he found rapping to be “not interesting” and that he was “pretty bored with it”. Knowing this, I can’t help but wonder if his love for production was Cherry Bomb’s raison d’etre, since it obviously wasn’t rapping. Style jumps from jazzy and soulful, to dingy and distorted, to bratty and impish. For the most part, I enjoy the production, but only song-by-song. “SMUCKERS” has the disjointed kit and plinky keys ripe for raps, and “THE BROWN STAINS OF DARKEESE LATIFAH PARTS 6-12 (REMIX)” is the kind head-banging rap romp we’ve come to expect from Tyler. As one piece though, it’s difficult to jump from the velvety vibes of “FIND YOUR WINGS” to the digitally distorted disaster that is “CHERRY BOMB.” Tyler’s influences on production are so many, and so brutishly enacted, teasing out nuance is like trying to only taste the eggs in a birthday cake globbed with chocolate sprinkles, hot sauce, and sauerkraut.

The content on Cherry Bomb isn’t the incisive stories of Wolf, or the idiosyncratic gore of vintage Odd Future. Instead, they’re tepid, tawdry, and filled with the typical uselessness of bling-era rap; Even in moments where Tyler’s natural low-brow wit comes through, the vocal is mixed so far down in the track, it’s hard to tease out any content worth diving into. Cherry Bomb is overwhelmed by invertebrate hype-rap; baseless bars about Tyler’s various sexual escapades and egregious wealth. While the content here is beige, Tyler’s position as the figurehead of the contrarian collective paints the material with an abrasive lacquer, creating an apathetic facade of being creatively challenging.

The original appeal of Tyler’s music wasn’t as much his music as it was the mind behind it. Constantly talking about gratuitous violence, or sexual debauchery, it felt like you were listening inside the mind of a Harmony Korine movie. You never knew what he wanted, or how he got here. The Tyler on Cherry Bomb isn’t raucous and unrelenting, but brain-numbingly boring, happy to spoon feed you track after track of recycled rap-isms about women, his car, or his genitals. In the outro to “KEEP DA O’S,” Tyler asks his listeners “I’m rapping about diamonds, and cars, and money now. What the fuck has gotten into me?” A questions I’m still asking.