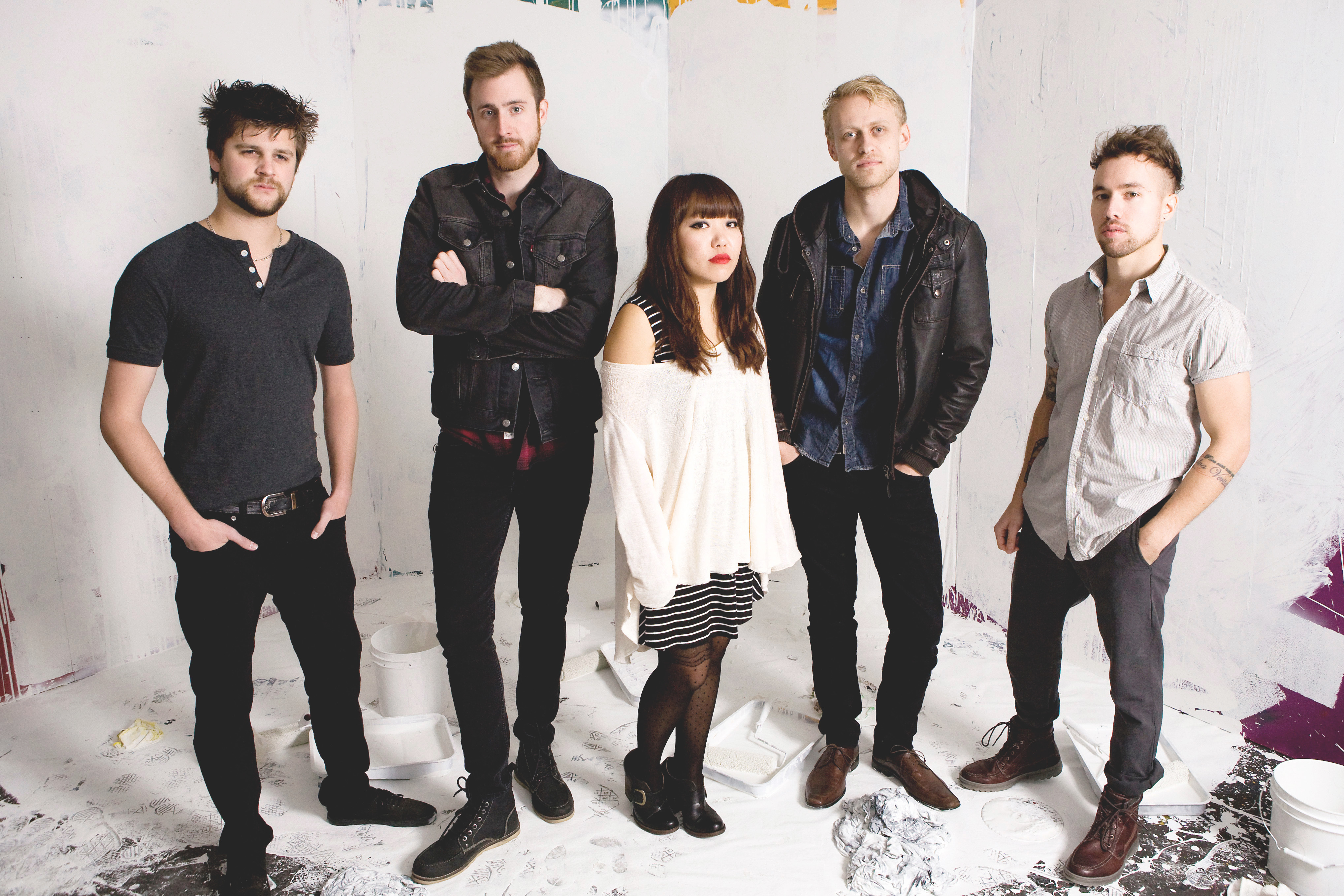 This month, The BandWagon sat down with Connie Hong, lead singer of Denver’s very own Ivory Circle. During our discussion, we talked about the release of the band’s triple EP series. They are titled Equilateral, Isosceles, and Scalene, respectively. In the first two chapters, Hong and her cohorts have crafted a thrumming, vibrant collection of dream-pop tunes. Equilateral is out now, and Isosceles hits shelves April 14th. Scalene is currently slated for a 2016 release. During our talk, we discuss Hong’s creative goals for this project, and how recent life events found their way into the the backbone of its content.

BandWagon (Clark M. Lamson): What are some of your immediate musical influences?

Connie Hong: I feel like its all over the place these days. I’ve always been inspired by The Beach Boys, growing up. Just because of those beautiful vocal harmonies. I was really into jazz when I was in college, and I feel like that’s carried through into my adulthood. I love Chet Baker. And then Chet Faker. (Laughs) I’ve really been into him lately. Yeah. Is that good? (Laughs)

BW: Yep, that’s a good list (laughs). Who would you say are some of Ivory Circle’s biggest influences? I know you’re not trying to crib anyone’s sound or anything like that. But recently, is there anything you guys have been listening to that really resonates with you in a performance space?

CH: I think I find, being influenced by other bands as a band, I have always really loved Florence and The Machine, and what she’s attained. That’s probably why we get some of those comparisons. We’re all really into Mutemath, and I feel like they’re a band that we reference a lot, because they are so visual, and so about that live performance. So I think that’s really an element we want to bring to our live shows too. That’s kind of our dream. (Laughs)

BW: What sparked the idea of doing a triple EP?

CH: It was an idea that evolved because I started Ivory Circle with an idea to create a demo, just so I could start playing, and give people some sort of an idea what it would sounds like. But the ultimate goal was to form a band, and create a bigger sounds with that. I knew from the beginning I wanted to work with Chris Beeble before it ever was a band. He’s the producer and our bass player.

BW: He’s the other half of the Entropy EP, correct?

CH: Right, yeah. Entropy was just the two of us. I originally approached him with the idea of doing a full length album. Not really any theme in mind, just wanted to start a new project. I had been writing songs that weren’t really fitting the style of the current project I was in. So I wanted to start something completely different. And I talked to him about seeing that through, and he seemed really excited about it. So we worked on Entropy together, just as a demo but really liked how those recordings sounded, so we released that. We intended on having that demo, Entropy rather, preface the full length. So originally I wanted all the songs on Entropy to make it onto the full length as full band arrangements, and then add other songs. What ended up happening was Entropy took a little bit longer than I anticipated to take. Then the songs that I was writing were straying away from the sound of Entropy. Talking to Chris too and then realizing how long that would take, to do a full length album. I can’t remember who brought it up first, but we just came to the realization that it would take too long, a couple years probably to do a full length. So the idea was to do maybe two EPs, and I liked the idea of doing three. There was a triangle logo on Entropy that my friend Ally made when she designed the EP. There’s three triangles on it, and I think that’s what sparked the idea of doing three EPs. 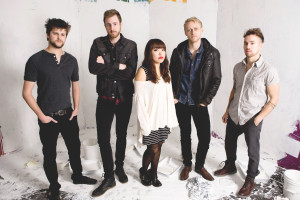 BW: I wanted to ask you, do shapes or geometry or triangles specifically, if they hold any weight with you creatively. I know there are people that can tie right and left brain together like that.

CH: Yeah, I’m a big nerd (laughs). I really like visual imagery, and using that to connect to different ideas. Each triangle represents something different. So that helps me to be more creative, for sure.

BW: Can I ask what the first two triangles in the EP series represent to you? I don’t want to give anything away from Scalene.

CH: I decided to do three broad themes, just based on different aspects and facets of my own life. So the first one, Equilateral, that one is really more based on my spiritual journey. The three equal sides, and you can kinda take that how you want to. The second one, Isosceles, is more based on my familial relationships. I’m an only child, so I only had my Mom and my Dad, and my Dad just passed away, so that’s that imagery, of one unequal side. So then Scalene will be the balance of the remaining relationships in my life, and even my relationship with myself. We’ll see how that one turns out, since I haven’t written much of that one yet.

BW: ’Were you excited to get to work with the song “Drown” again? It appeared on Entropy, and then again on Equilateral.

CH: I really didn’t want to force it because of the way things are going with the new songs, and how everything was turning out. Chris and I had actually worked on full band arrangements on a couple other songs off of Entropy, but “Drown” was the only one, if I recall, that really stuck, that we were excited about. We had labored over it for a while. It’s tricky when you have one version stuck in your head, and then to have to find a new, creative way to do it. I think what happened was, I suggested a completely different intro, to just layer on the vocals. We did that, and it just transformed the song from there. I think we did that demo a while ago. We did those full band arrangements before Equilateral. I think a couple of them, we had decided to save. We had roughly planned out which songs would go on which EP, from Entropy. And then some of them did, some of them didn’t.

BW: How much of the material was written before you started any of the three EPs?

CH: All of the songs, including the ones on Entropy, were all written around the same time. I don’t have a lot of older songs. It just this wave of new songs rushing towards me, before I started writing for Entropy, and that’s what turned into Entropy. I had a couple old ones I used, but all the songs for the EPs Equilateral and Isosceles were all new, within the past couple years.

BW: I feel like there’s a certain type of female vocal that’s so overdone lately. That throaty, foggy alto that we’re seeing in a lot of newer pop musicians. It was so refreshing to listen to your voice, which is clear, and bright. Is that a conscious choice, or your natural voice?

CH: To be honest, I feel like its me realizing I can actually be myself. It’s funny that you bring that up, and I think people are surprised when I say this, but for a long time, I’ve been really self conscious of my voice. People used to say that I sounded like a Disney Princess (laughs). I’ve always been really self conscious of that higher tamber in my voice, because I’ve always really loved listening to that low, throaty, effortless female voice, and I just never had that, and always felt kinda silly trying to imitate that. For a while I did try to imitate that, and it sounded really silly. I think that’s what’s been really freeing about Ivory Circle. My writing hasn’t been trying to fit into what’s expected. I think it’s really freeing to be able to do what my voice wants to do. I want to be loud sometimes, and quiet sometimes, and sing high (laughs).

BW: Where did the name Ivory Circle come from?

CH: The short explanation is that it was the first street I remember living on. I wanted something fairly simple, that didn’t have too much meaning behind it. Names are kind of hard to figure out (laughs). I didn’t want something too flowery, but I thought it was still significant in what it represented to me.

BW: There were a lot of these beautiful, textured vocal melodies, morso on Isosceles than Equilateral. It just makes that vocal even more beautiful. Where does your fondness for vocal harmony come from? I know you said the Beach Boys earlier, which totally makes sense. I got the feeling, maybe just because I was, that you were possibly a bit of a choir geek in high school. Is there any truth to that?

BW: I wanted to ask you about “Move on” from Isosceles. Now knowing what you said earlier about Isosceles, and where that’s coming from its even more moving. I wanted to ask specifically about the backing noise on the track. It gives this really great ethereal, noncorporeal quality. What did that noise do for you in that song?

CH: That noise was actually Chris’ idea. I wanted something really minimal, and focus on the vocal. I think we had one day in the studio where we recorded the strings. In a little bit of extra time, some of the other guys from the band picked up some random instruments that we had brought over. Like, glockenspiel and shakers or something (laughs). We just kind of took turns. I think the cello player was there early, so he played a little too. So Chris kinda messed around with those sounds, and then we spent a day at Union Station, and he recorded at the Lightrail all that ambient noise, and people walking around. I think its really impactful, and really helps the mood of the song.

BW: There’s a male/female duet on both EPs so far. First, I wanted to ask if we might get a third duet on Scalene, and secondly where that choice came from?

CH: The 3rd EP, I don’t know. It’s very possible. Its kinda funny, because it wasn’t my set intention to write these duets. The first one was intentional. I wanted to write a male/female duet because I had never done that before. I don’t remember my exact thought process behind it, but I heard a male voice when I wrote that song, “Walk With Me.” We were thinking about who should sing that first duet. Aaron Marsh, the one who sings on the second EP came to mind. Then I had talked to him about maybe doing the first duet. I realized that I would rather write a song for his voice. And that’s what happened (laughs). That one was kind of just a happy accident.