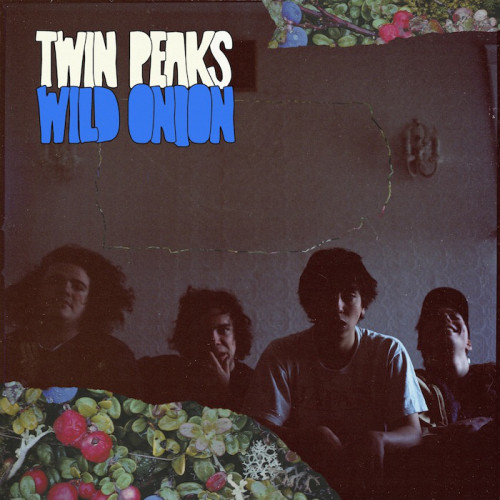 To dismiss Twin Peaks simply because they share a name with an old television show beloved by some and forgotten by others would be a mistake. Indeed, the Chicago quartet is rudimentary at face value, but the second the disc starts spinning they reveal their true colors as something much more exciting and special. Their newest LP, Wild Onion, is an entertaining piece that keeps things relatively grounded to huge success.

Right out of the gate, Wild Onion is just straight-up fun. Album opener “I Found a New Way” is immediately endearing for its apparent Iggy Pop influences. Track titles and lyrics are delightfully bizarre and nonsensical, from sophomore cut “Strawberry Smoothie” to “Making Breakfast,” which is musically one of the absolute best tracks on the album.

There are a lot of memorable riffs here; Twin Peaks have the endangered ability to craft tantalizing, catchy riffs and scratch the itch for that early-college-years garage rock. It’s lazy without feeling lackadaisical, simple without being stripped down. There’s an endearing sort of relaxed quality to the music, despite the catchy energy. It’s difficult bordering on impossible to cherry pick the best tracks to talk about on Wild Onion; they’re nearly all fantastic, and even the weaker tracks like “Flavor” have such a cheerful exuberance that dismissing them almost instills guilt. These four Chicagoans have been playing together since high school, and since their original show for an audience of three people they’ve been saluting and subverting the musical stylings of classic artists ranging from The Beatles to The Pixies.

A third of the way through the release, “Strange World” is an odd little track that plays like an intermission between the wilder parts of the album, but reminds us that things will be picking up again soon with a more energetic, fuzzy second half. Three tracks later, “Stranger World” follows along the same lines but adds a terrific saxophone solo as the centerpiece. It’s mostly the exact same music, but that sax dominates the entire 75 seconds of the track. Once again, it breaks the album up quite well and gives the release as a whole some necessary structure.

“Ordinary People” is truly something special, however. Ditching most of the heavier guitar found on the rest of the album, this track takes their swimmy vibe and pushes it to 11 for a completely psychedelic, relaxing and delightful three and a half minutes, ending with a perfect coda. Granted, an entire album of this might be too much, so a single song is like unexpectedly getting to the delicious core of a piece of candy.

God forbid, if forced to choose other choice cuts from the consistently solid album include the memorable riffing of “Good Lovin’” even as the lyrics continue to make little to no damn sense (to their credit), or the more elaborate vocalization and guitar work of “Mirror of Time.” Beneath the fun, there are layers of darkness as the album serves as a way for the members to confront the challenges of growing up faster than expected, and the insecurities that we all went through in our early twenties. Their angst is our gain, with those insecurities having been channeled into one of 2014’s best albums.

Wild Onion is the perfect soundtrack to the epic battle between a sweltering summer day and a barely-sufficient air conditioner. This is a warm, exciting album that’s memorable in how straightforward it is. The way it manages to be both gently fun and packed with verve simultaneously is incredibly satisfying. As simplistic as some of these elements are, the release gets more and more eclectic as it goes on, adding instruments here and there or slightly tweaking the style so as not to go stale. Yet, these 20-somethings never let the machine get too big or take control. That’s impressive enough on its own, because with Wild Onion, these boys from Chicago have assembled one hell of a machine indeed.