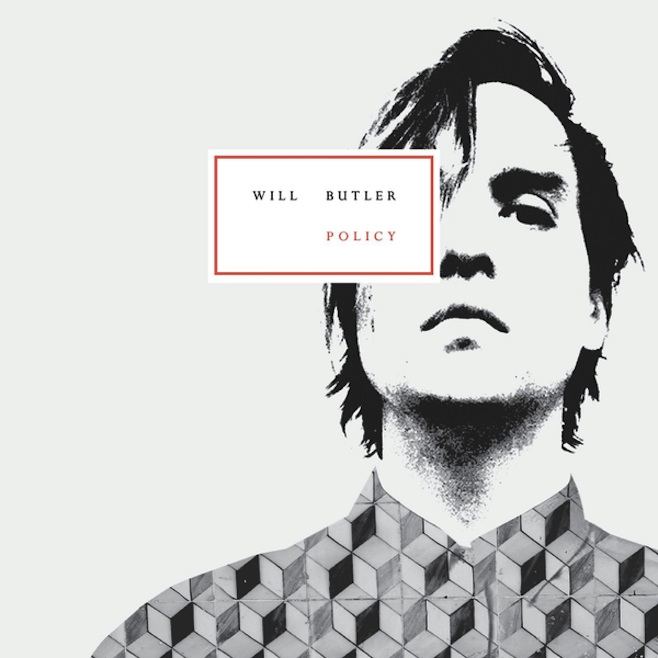 In May of last year, I was lucky enough to score some tickets to see one of my favorite bands in concert. The show was at the Pepsi Center (not my first, second, or third choice in venue) but the show was everything I hoped it would be. It was raucous and colorful. The band’s members were decked out in Bowie-esqe face paints, the set changed with every song, and at one point, the stadium was filled with gold confetti to the effect that I couldn’t see my hands in front of my face. To the left of the singer, holding a tambourine, or guitar, or pounding on the keys, was who I would later come to know as the lead singer’s younger brother. I know the singer is typically the focus in band settings, but the energy coming off the tambourine man was inescapable. The music was his voice, and he screamed his throat raw every song. The band was Arcade Fire, and the man was Will Butler.

Policy marks the first solo venture for Butler, and the influence he brings from his work in Arcade Fire is clear, especially from Reflektor, their latest album. The warm, fuzzy bass lines, the nods to disco and funk, the danciness of it all, and it wouldn’t be out of line to say that the brothers have similar vocals. Understandable, but noted. There will be people bothered by this, but I expect there are even more who don’t know or care either way. After a few listens, I’m now a part of the latter camp.

The lead single “Anna” is a tune dripping with 80’s vibe. The lyrics tell of a girl on the run, and the urgency is matched in the song, if not with a Divo-tinged vocal, and a wailing saxophone. The track is unashamedly dancey, and perhaps unknowingly dated. The pulsing synth and banging snare is a combo that shows up more than once in the album, and succeeds in the kind of catchiness that creates involuntary toe-taps and head-bobs.

As fun as the 80’s pop is, Butler has forethought enough to see that it won’t fill an album. Tracks like “Finish What I Started” and “Sing to Me” provide some of the sleepier moments on the album. What they lack in tempo, they stand as some of the work that truly separates his solo material from the Arcade Fire project. It is in these songs, as well as some of the rockier pieces, “Son of God” and “What I Want” that Butler’s salience of character comes to full fruition. In brief moments, his command of the song bring to mind the sorts of musical auteurs people used to dedicate themselves to. Reed, Costello, Buckley. Not in technical skill, but in passion, and dedication to challenge.

In Policy, Butler gives a performance brimming and frothing with the same frenetic energy he has on stage. It can be dramatic, or kooky. While the sonics might not be totally unique, Butler rips up an old worn gown, and douses it in paint. In the end, even if it bears resemblance to work from Arcade Fire, I’m not sure it matters much. The tunes, like the little brother, can stand on their own.