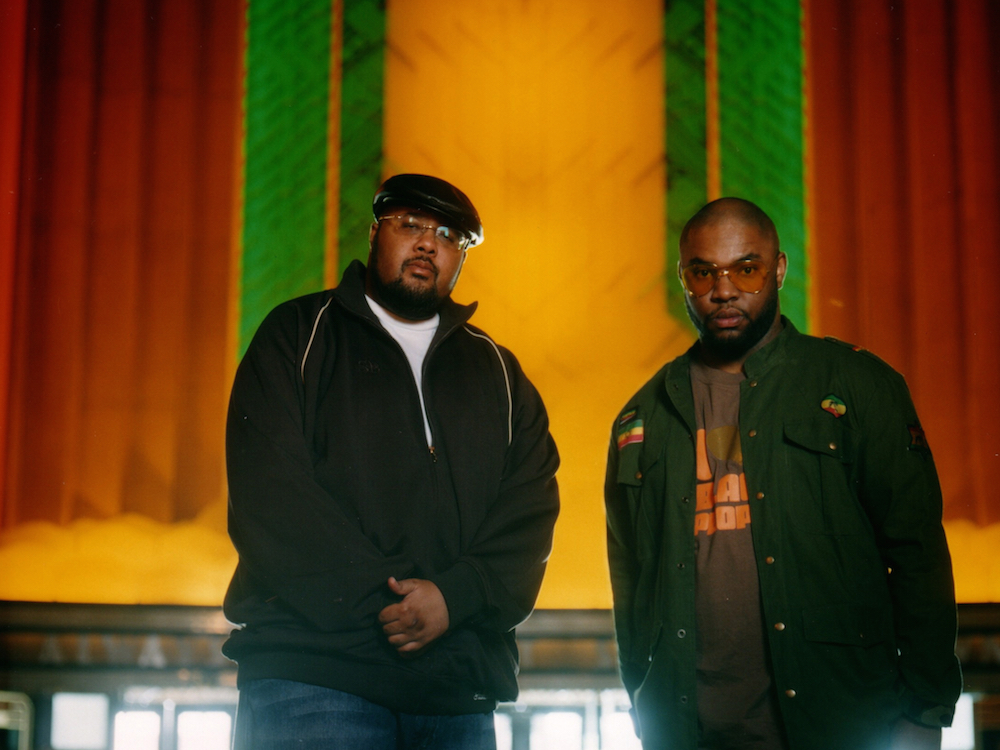 Emcee Gift of Gab of Blackalicious is a legend. He is so much a legend that “Harry Potter” (Daniel Radcliffe) took it upon himself to learn every single word of “Alphabet Aerobics” and rap it on Jimmy Fallon. Macklemore recently “Instagramed” a photo of Blackalicious’ first album, 1999’s Nia, with a caption that read, “One of the most important albums I ever came in contact with. It influenced me on spiritual level. It validated things I felt but couldn’t put into my own words yet. That’s what the power of good music.” Of course, this post blew up and kind of shone a spotlight back on the Oakland-based hip-hop duo.

Comprised of DJ/producer Chief Xcel and Gab, Blackalicious is real hip-hop. It’s the kind of hip-hop that makes you think, challenges everything you thought you believed and inspires you to be the best version of yourself. However, you’d never guess the man behind songs like “Make You Feel That Way” and “Purest Love” (both off of 2002’s Blazing Arrow) has his own personal demons he wrestles with on a daily basis. “Make You Feel That Way” was actually written as an antidote to his own depression and he’s currently on dialysis as he awaits a kidney transplant. Despite these challenges, Gab can normally be found with a big smile slapped across his face and positive words that illustrate his deep-rooted optimism for the future, a future that’s looking bright. Blackalicious is putting the finishing touches on a new album titled Imani, the pair’s first full-length since 2005’s The Craft. Needless to say, it’s long overdue and fans are drooling with anticipation. In preparation for the album release, Blackalicious has embarked on a sizeable world tour, which kicked off in North America on November 29 in Santa Fe, New Mexico and winds up in Colorado mid-December.

“The record is finished,” Gab says with a hint of excitement in his voice. “We have a label and good management in place. We’re getting ready to put it out in either March or April. We’re about to do this tour this month then we’re going to Canada in July and Europe in February. We just got offered an Australian tour this May so we’re hitting the world!”

It’s a great sign he’s talking about traveling. As mentioned before, Gab has been battling severe health issues, which have impeded his travel for the past few years.

“I’m feeling good today,” Gab says. “Everything is good. I’m taking a lot of vitamins, probiotics, supplements, and I’m learning a lot about what I need to do as a person on dialysis to maintain optimal health. My transplant is also looking good. I have three people in place, but I need to lose more weight. By the time we get off tour, I should be at the weight I need to be [laughs]. Hopefully, I can have a kidney in the next six months or by summer 2015.”

Perhaps that’s why the album is called Imani, the Swahili word for “faith.” Gab has nothing but faith in terms of his health, career, future, and life in general.

“Life is based on faith,” he explains. “Then there have been a lot of things that have been going on for me personally like health and weight. One thing in life is you gotta believe and you gotta have hope. If you don’t have faith, life can get dark. Life can get really dark, really quick. You have to know all of this is happening for a reason, or else it’s like what’s the purpose of living?”

Although nothing has been leaked in terms of content yet, the album will presumably be brimming with powerful insights and brutally honest lyricism. It’s something Gab has perfected over the years. If you listen closely, you can pick up on some of his personal struggles in many of his songs. One in particular is his love/hate relationship with alcohol.

“There have been several songs where I’ve written about it,” he reveals. “I’m definitely in a better place now than I’ve ever been and there will be songs about it on the new album, but more so about faith than anything else and my spiritual growth. Any addict that becomes clean, to a degree, has to become more spiritual. To me, there’s not a lot of middle ground. For a person who is truly an addict, in my personal experience, if you’re an addict you either find God or you succumb to your drug. I don’t know, but it’s different for everybody. I may not be rhyming about the alcohol directly like I did before. It will be more about how I’m growing as a person. Once you get rid of the substance, you have to deal with why you drank in the first place. It will be more geared toward that. People might not even pick up what I’m talking about because it’s just human experience that everyone can relate to.”

In terms of sound, Gab says there’s a lot of funk, soul and “definitely a lot of hip-hop.” Lateef the Truthspeaker and Lyrics Born (his Quannum Project label mates and dear friends) make an appearance, as well as singer Zap Mama.

“I’m real proud of it,” he says. “Everyone I’ve let hear it has been pretty mindblown, saying that this is what people have been waiting to hear from us. As a writer, I’m way more prolific right now. I used to write in spurts when I drank. I used to kind of get backed up, get behind and then I’d just write here and there. Now I find my writing is more consistent all across the board. I’m excited about the new record.”

“I’ve always been a style junkie,” he says. “I want to hear something that takes me in a new direction. When I first heard Criminal Minded, my mind was blown because I didn’t know it was possible to rap like that.”

Funny enough, his first rap was written in self-defense. A kid from his neighborhood used to battle everyone and one day Gab was in his crosshairs.

“He wouldn’t even battle people,” he remembers. “He would just destroy them. His ‘victim’ would be left crying. One day he chose me. He just went off on me. I was like 11. So I wrote a rap in self-defense. I was like, ‘Fuck that, he’s not going to do that to me again.’ Seven years later, I came back and I hung out with this dude. They called him Star MC. I realized I was better than that dude. And he said that, too! He said, ‘Dude, you got better than me.’ My confidence went through the roof. The incident with Star MC was what really made me realize that’s what I wanted to do.”

If you’ve never seen a Blackalicious show or a Gift of Gab solo performance, your education in hip-hop culture is incomplete. He’s one in a million. It’s unclear if he even realizes just how good he is or what he’s contributed to the culture.

“Every now and then you stop and think about how long you’ve been doing it,” he says. “It’s something I’m still passionate about. I always want to challenge myself. The day it’s not a challenge is the day I fall off. It will never be like, ‘Oh, I’m Gift of Gab so I don’t have to try anymore.’

“I’m really looking forward to going back to Europe because I haven’t been there since 2010,” he adds. “My health issues kind of prevented that, but we’ve figured out how to work around. I can’t wait to see some foreign territory because I love traveling. I can’t wait for this upcoming North American tour. I love being on the road. I love this life.”