Finalist Competing For $1,000 and Eternal Glory: 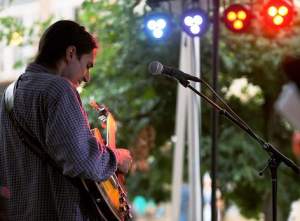 Electric Stair Child are a jam rock band based out of Greeley and have been laying down their weird amalgamation of jam funk rock there for several years now. Their set wonders through the realms of desert rock, reggae, funk, and even a touch of hip hop, creating something tailored to a live experience. This appreciation of the live show is what they brought with them to this year’s battle and it paid off. Returning from last year, ESC came prepared with a solid game plan, bringing an epic live show that took them to the next level.

ESC enjoys things like cool solos, some nice spacey synth, and shenanigans with people in banana and monkey suits.  Speaking with guitarist and vocalist Caleb D’Aleo he says as a band, they collectively fear nothing. Together they will withstand anything the universe will throw at them and through positive jams they will destroy their enemies and triumph over evil. He also said that if they win the $1,000 the band intends to invest it back into merchandise in order to continue generating income. 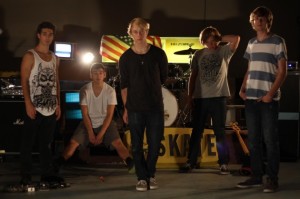 Shatterproof is known as one of the rising stars of the Northern Colorado music scene. Based out of Fort Collins, they have built a name for themselves with their brand of alternative rock with punk influences, a term they use to describe themselves on their Facebook and website but one that does not come to doing their sound justice.

Shatterproof ‘s sound is emotional and raw, tapping into the band’s deep seeded frustration and aw with the world around them. It’s energetic, engaging, and fun. The violin instead of a lead guitar is a nice touch too. If they win they plan to add their earrings to their band fund as they are saving up for an 8-track album that will cost roughly $10,000.

When asked what the band feared, lead vocalist and acoustic guitarist Bransen Hoog had this to say; “As a band, we have a general fear of a stop in growth. We fear that we will stop growing as musicians, that our fanbase will stop growing, and that our songs will stop getting better. In general, we strive to better ourselves as musicians and as songwriters with every new song we write. We strive to write each song better than the previous one. I am afraid one day the songs will stop improving.” 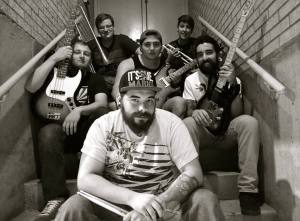 Hypnotic Vibes, round one winner of Battle of the Bands looks forward to the competition in the final round. Their cosmic, funkadelic, reggae, ambient sound is a jam the band continues to morph as they go. Their presence is undeniably precise, entertaining and dedicated in feeding the energy of the crowd. For the final round they’ve created all original work, songs that are virgin to the stage. They’re passionate in creating an unconditional relationship between their music and the way people enjoy it. They feel their responsibility to music is to nurture a new sound as much as possible, but then let it speak for itself to learn and grow from where it originally started, constantly evolving.

The band started out as a simple acoustic act from Joe Solano (lead vocalist/guitar) and Stefan Lopez (lead guitarist/vocalist) but has bloomed in to a full band accompaniment to complete their musical destiny. The six member band consists of drummer Mario Alvarado, bassist AJ Garner, trombonist Sterling Swanson, trumpeter Alex Vilanova as well as the two original members. If HV sweeps the final round they plan to use the winnings to continue their journey out of Colorado and record a full length album, but they plan to do this regardless of the BOFTB results.

When asking the finalist what their collective fear as a band was, HV decided on being alone. Not in a traditional sense of being desperate for human attention or being physically alone, but being unconnected, divided as a band.

“When you’re in a band, you’re essentially married to your band mates,” Lopez said. “It takes all of us to be sure these dreams are accomplished. Stardom is meant to be all of us doing it together. But fear is necessary, because if you’re not afraid then you’re not challenging yourself or the world around you.”

Saturday November 6th the bands will compete and score points based off technique, style, stage prescence etc. But most importantly the crowd vote. A good band entertains their audience. Be a part of the 2014 Battle of the Bands vote on Saturday at the Moxi. Read up on the three finalist and check them out live.