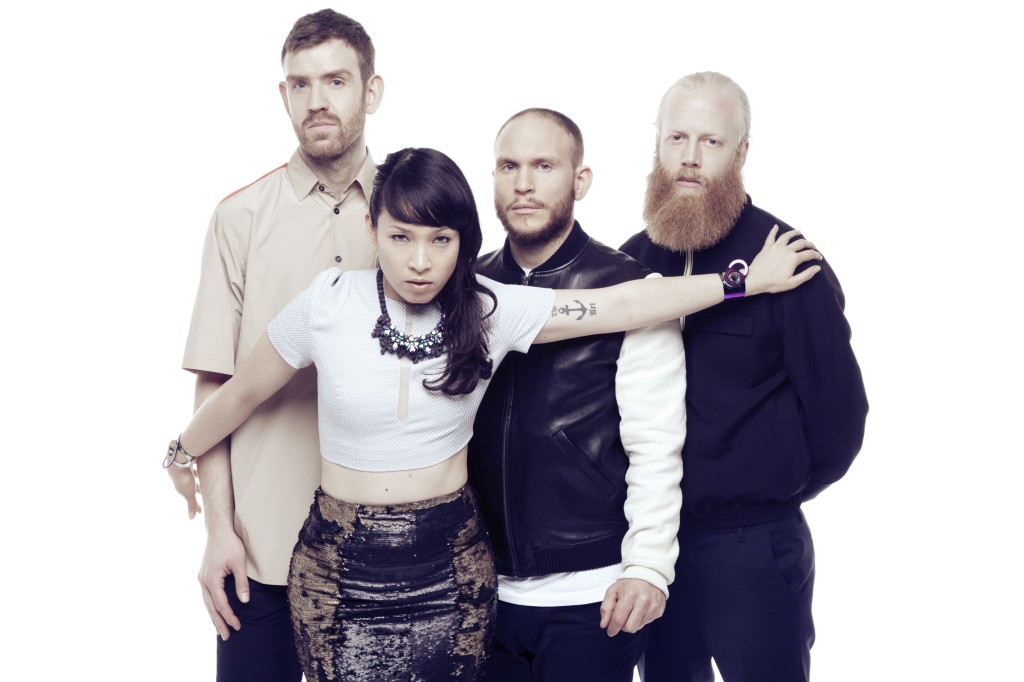 The moment vocalist Yukimi Nagano drops her first note on the 2010 Gorillaz track “Empire Ants,” she promptly steals the show from Damon Albarn. As the 32-year-old front woman of Little Dragon, she’s used to being in the spotlight by now. Since 2009’s Machine Dreams, the Swedish four-piece (sometimes five) has been steadily on the rise, especially in the United States. Their third album, 2011’s Ritual Union, appeared to cement their arrival, reaching number 78 on the U.S. Billboard 200 chart. It’s their most successful album to date.

Comprised of Nagano, bassist Fredrik Kallgren Wallin, keyboardist Hakan Wirenstrand, and drummer Erik Bodin, the band’s name was inspired by the “Little Dragon” nickname Nagano earned due to the “fuming tantrums” she would routinely throw in the studio. Teetering on the line between electronic dance music and down tempo, Little Dragon’s strengths lie in the ability to evoke an emotional response while still remaining catchy with its pop sensibilities. The group’s latest album, Nabuma Rubberband, finds Nagano channeling her inner Janet Jackson, whom she would listen to while wandering around Gothenburg, particularly the 1993 song “Any Time, Any Place.” More “slow jams” than electro-pop, Nabuma Rubberband is a new adventure for Little Dragon. Nagano’s smooth, silky voice is still heavily present, but it’s a bit more subdued on tracks like “Let Go” and “Mirror.” Lead singles “Klap Klap” and “Pretty Girls” are reminiscent of older Little Dragon material, but overall the album jogs along at a much slower pace. Surprisingly, Little Dragon got the chance to work with one of their childhood heroes Dave Jolicoeur of De La Soul on this record, which was no doubt a thrill for them. It makes sense considering they toured together with De La Soul, half The Clash, the late Bobby Womack, and members of The Pharcyde as part of the 2010 Gorillaz tour. As Little Dragon prepares to embark on yet another tour expedition, Bodin had a few moments to talk the “Little Dragon,” Gorillaz tour and Janet Jackson.

BandWagon Magazine (Kyle Eustice): I can’t imagine it’s easy to break out of Sweden into the United States. How exactly did it happen?

Erik Bodin: I believe it was our English manager who gave the music to KCRW in California. They were the first to really support us that massively and since then we’ve been coming back to tour the United States every year.

What is the music scene like Gothenburg? Where does Little Dragon fit into it?

I think we fit into the “hiding in the studio all year long” scene. There is a lot of music in Gothenburg I must say.

The first time I heard of Little Dragon was on the Gorillaz album and I thought, ’who is this voice? I have to find it.’ So with a little research, I found Machine Dreams. I was hooked. What’s your songwriting process like?

We jam and record and produce all at the same time and sometimes we come up with nice tunes that we put on the album. Basically [laughs].

The fact that the name Little Dragon emerged out a nickname for Yukimi is pretty funny. Can you tell me a little bit about that story?

It was just a time in our lives when Yukimi was getting frustrated if she didn’t get all her creativity out. But it wasn’t for long and now it’s just a nice little friendly dragon we are talking about.

Janet has this epic sensual minimalistic way of singing sometimes that we really admire.

What made you decide to pick “Klapp Klapp” as the first single?

It’s a trancy baseline that inspired a lot of melodies and we thought it was catchy enough to be a single.

2011’s Ritual Union was one of Little Dragon’s most successful albums. What does success look like to you today?

Having a bowl of popcorn within reach and just sit with a smile on your face looking back to the show we just did with all the love we felt from the crowd.

What did it feel like to share the stage with two members of The Clash, De La Soul and the late Bobby Womack on the Gorillaz tour?

Amazing, of course. It felt like we all shared the childish passion for music and being-on-the-road lifestyle. Good memories. May your soul rest in peace Bobby!