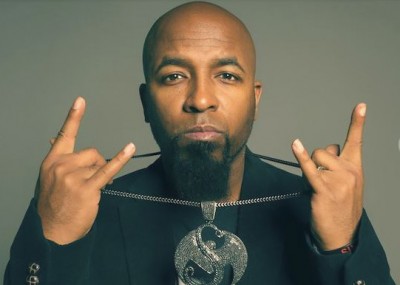 During the making of 2009’s K.O.D. (King of Darkness), Tech N9ne was going through a very emotional time. The Kansas City, Missouri-based emcee (real name Aaron Yates) was at risk of losing his mother to pancreatitis and things were looking grim. All this was happening during a fulfilling career he began when he was barely breaking out of his teens. Since then, he’s become one of the most successful independent artists in music history. Clearly the atypical rapper, he deals in fallen angels and atheism, which alone sets him worlds apart from most other MCs. He has a style that absolutely murders the competition; speedy raps that combine wicked, tricky wordplay with melodic hooks, an on stage presence that involves tribal face paint, a straight jacket and blood red hair, making him one of the most unique figures in the game. With a career spanning over two decades, including fourteen studio albums and over two million independent sales, he’s no slacker either. After becoming increasingly frustrated with major labels, Tech launched his own imprint, Strange Music, Inc. in 1999 with his manager.

“I’ve been dicked around so many times by major labels,” Tech explains. “I’ve been through a lot of major label deals, and nobody could do what I wanted. So I figured who better to do you then you? I started the label with my manager, Travis O‘Guin. We can do it better than anybody even without video or radio. If I had all that shit backing me up, I would still be number one with my face painted and everything. Call me a weirdo. I love it.”

While the commercial successes of 2008’s Killer and 2009’s Sickology 101 put Tech N9ne’s record sales well over the one million mark, the aforementioned album, K.O.D. (King of Darkness), impacted him in ways he could not predict. The ominous content that envelops the bulk of his catalog has always been a staple in his music, but during the recording of K.O.D, he was fighting some personal demons that hit a little too close to home. It nearly destroyed him in the process.

“I have a few songs on there about my mom being sick,” he notes. “It’s also about me questioning God. That album was different, because on past releases, I only had sections of darkness. K.O.D. is completely dark. I had no idea that all the negative energy would affect me the way it did. I vowed never to do another album like that again. I made a mistake. I thought I could enjoy it, but it really brought me down.

“It’s beautiful music,” he continues, “but the negative energy had me sulking. It had me falling out with everybody around me. I was deep in my hole. That’s what the clown is for: It helps me hide. Behind that, there’s a lot of pain. I hid it really well.”

Despite his challenges, Tech has emerged strong than ever. His new album, Strangeulation, just hit the shelves and he’s amidst a massive nationwide tour. Strange Music is also growing in ways he didn’t even imagine.

“I’ve been growing as you can see,” he says. “I’m not talking about getting fatter because I’m losing weight on this tour. I mean growing as an artist since we talked. It’s such a blessing. We have the rest of the world to infest. It’s a blessing to even have fans. I know what it’s like not to have any. I’m just really in love with music, man. Even if I’m tired, if I hear a dope beat, I have to rap to it or I have to sing to it. I just feel the music. The fact people want to spend their hard earned money to come to my shows and buy my CDs and my artists’ CDs is such a blessing. That’s motivation enough to keep me going every day. New fans come in and I’m showing the older fans that I’m still here and not going anywhere.”

“We have to build on to the headquarters now,” he adds. “Not to mention, we just bought another building on the next block, which is a 4 million dollar project called Strange Land Studios. Now we have to add on to the headquarters, the one we’ve always had. It’s humungous. We have to add on ten more offices spaces so we’re going to build another building on to it. So we’re steadily expanding. It’s crazy.”

With the revolving door of rappers that make up contemporary hip-hop, Tech N9ne’s longevity is a testament to his relentless work ethic. He makes no apologies for who he is, what he does or what he raps about. Being real is what comes naturally.

“My music is me being inside out,” he points out. “It’s me not holding anything back. It’s me not having a defense mechanism. People call me a devil worshiper. Fuck them for not coming to my shows. They are missing one of the best rappers alive. I have no sympathy for them. I try to get people to my shows that hate on me. A lot of black people hate on me because I’m different. People don’t like what they don’t understand, so they try to destroy it. At first they’re like, ‘Eww, I don’t like him.’ Then they listen to me, then they’re like, ‘Wait this guy is good.’ Don’t judge a book by a cover and fuck being anything else but crazy.”