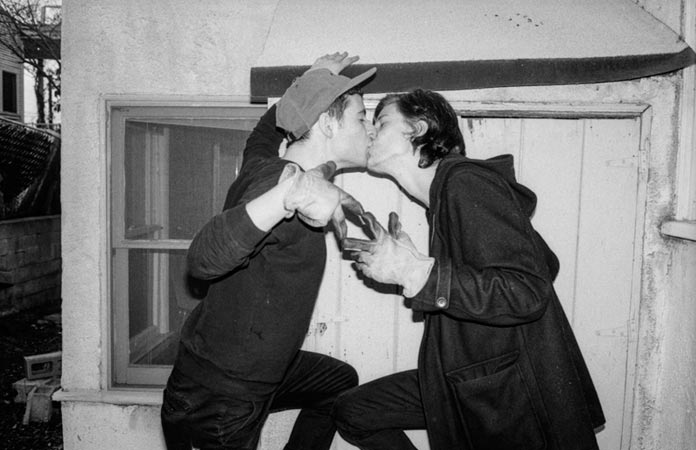 It’s not easy being weird. Bands that attempt it come off as either trying too hard, or simply botch the effort to produce a product that skews too heavily in one direction: either half-hearted and boring, or so aggressive and outrageous, it’s off-putting. How impressive it is, then, that duo Dub Thompson toes that line astonishing precision, edging debut album 9 Songs into territory that lies comfortably between those extremes and rarely veering off-course.

Dub Thompson assures us that they’re not messing around right from the opening seconds of “Hayward!” by not even allowing a single guitar riff to eke by without a powerful dose of squishy psychedelic frills to go along with it before launching into speedy thrashing and oversaturated vocals. Even that change in direction isn’t quite enough, and once again they have to switch gears, all within the space of a song that’s just under 5 minutes long.

This is a trend that follows through the entire album (which is, in keeping with the band’s anarchic feel, actually 8 songs long). “No Time” sounds like the love child of Mr. Bungle and David Lynch, and “Epicondyles” slows things down even more to a crawling groove before pumping back up into a loud chorus. The album stumbles but once, with an uninspired guitar riff and boring lyrics in “Mono,” but it picks itself back up right away with the last three songs on the album, which build to an awesome, aggressive climax with “Pterodactyls.” There’s not really any reason why any of these songs are named as they are, and the lyrics similarly make little to no sense—yet in their own weird little universe, they’re just right. 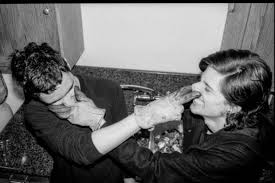 Almost more than anything, the album is just daring. Dub Thompson isn’t afraid to experiment with multiple styles and sounds even within the same song, and while this could be a death sentence, the duo owns the strange and embraces that absurd for a sound that is genuinely, delightfully unpredictable. The effortlessness with which Dub Thompson moves through so many different ideas is a rare strength. They explore more in a single album than some bands attempt in years. While most songs carry a similar thread or reuse sounds or concepts, each usage is fresh and weird.

Right at the middle of the album, “Dograces” is a magnificent musical casserole, featuring an absolutely killer drum rhythm before dropping the keyboard, dissolving into a Zappa-esque cacophony and ending with what might be Hell’s elevator music. “9 Songs” begins with utter chaos before sliding into more coherent territory.

9 Songs is utterly chaotic, and yet, the cacophony never feels disorganized. There’s an immense amount of sound firing off in every direction, each piece slamming into the others, but there’s still a definitive order. Each switch to a new idea, time signature and instrumentation feels completely organic despite the intense unpredictability. Sometimes that

Dub Thompson are well equipped on their current trajectory to occupy a very special corner of indie rock: the bizarre, eclectic, and completely unique that is not treasured by the majority, but held close to the heart by those that do. It’s almost viciously unique, and promises to be incredibly divisive. These two 19-year-olds probably don’t care. They’ve made an album that does exactly what they’ve wanted it to do, and that alone makes is completely worth listening to.