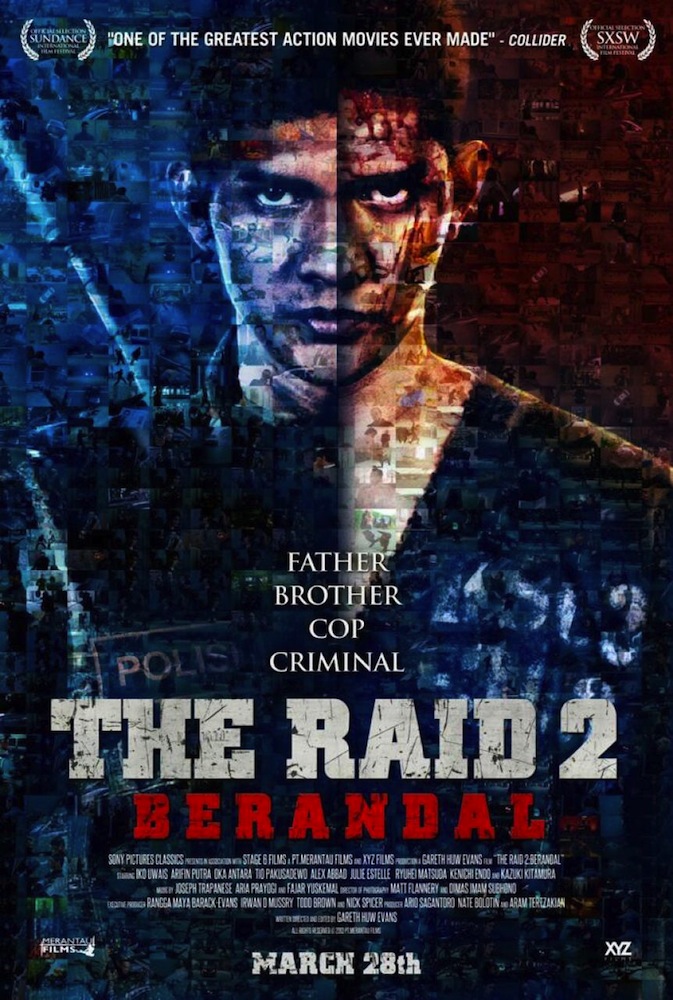 Unlike last year, which seemed to be the year of disappointing sequels for me, (I’m looking at you, Iron Man 3 and Star Trek Into Darkness) I was enthralled in April with follow-ups to two of my favorite movies: Captain America: The Winter Soldier, and The Raid 2. Both were films I was looking forward to, and I walked away with a level of satisfaction I haven’t really experienced with a sequel since 2012’s Skyfall. Both Winter Soldier and The Raid 2 are currently contenders for Best Action Film of 2014, and I’m willing to stick my neck out for Gareth Evans’ Indonesian Martial Arts epic and say it’s the winner. The Captain may be the first superhero in the Marvel universe, but he’s not Rama.

(Spoilers for The Raid: Redemption ahead.)

Raid 2 starts off where the first film ended. Iko Uwais’ Rama, the hero, is one of the three police officers left after a botched attempt to take down crime lord Tama. The other two are the injured Bowo (Tegar Satrya) and the corrupt Lt. Wahyu (Pierre Gruno). Wahyu left in handcuffs at the end of the first movie and Rama got his hands on a collection of tapes implicating other corrupt cops in Jakarta. On the advice of Tama’s numbers man Andi (Donny Alamsyah), Rama tracks down the supposedly trustworthy cop Bunawar (Cok Simbara).

Bunawar tells Rama that the tapes won’t do much good and will only draw out bigger baddies looking to not only off him, but also his family. So he gives Rama an offer: He’ll protect Rama’s family if he agrees to be part of an anti-corruption sting. The goal: go undercover in the criminal world by going to prison, earn the loyalty of Uco (Arifin Putra) and infiltrate his father’s organization, with the hope to implicate crooked police commissioner Reza. (Roy Marten)

Unfortunately, things don’t go as Rama initially hoped. He finds that Uco is hungry for power, and is willing to undermine his father Bangun (Tio Pakusadewo) and start a war with a rival Japanese mob to get that power. And Uco finds an ally with Bejo, (Alex Abbad) a rising gangster who wishes to profit from the chaos that would follow such a war. Rama is in deep shit.

Like the first film, The Raid 2 is a showcase for Pencak Silat, which is a broad description of Indonesian martial arts. Unlike Japanese or Chinese-based martial arts, Silat is rough, raw and fast, seemingly chaotic but surprisingly graceful and purposeful. On screen, it’s amazing to watch, and like everything in The Raid 2, it’s amped up to the max.

The Raid: Redemption was kind of like the original Die Hard, in that it took place in a single building. Evans’ follow-up widens its view, taking place all over Jakarta. The cinematography is beautiful and stunning at times, with each location giving off it’s own unique vibe for the scene at hand.

The writing and characters of the film are also impressive. Yayan Ruhian, who played Mad Dog in the previous film, plays homeless assassin Prakoso, an associate of Bangun and Uco. His character, aside from Rama, is actually one of the most sympathetic characters in the film even though he’s a psychopath, and he’s only on screen for around 10 minutes. There’s also the brother-sister duo of Baseball Bat Man (Very Tri Yulisman) and Hammer Girl, (Julie Estelle) whose backstory isn’t elaborated on, but they’re among the two new characters who stand out. Hammer Girl’s introductory fight scene is amazing. And gory.

Uwais’ Rama is still awesome; his mastery of silat and his acting skills have clearly grown since the first film. Arifin Putra’s Uco is also an excellent baddie, a guy who’s daddy issues give him both a bit of depth and make him all the more scarier. Abbad’s Bejo, however, is the real hardcore villain of the bunch. His presence is terrifying.

There are a couple other things that stood out from me: The car chase is really impressive, far more so than what I witnessed in Need For Speed months ago. Furthermore, the gore in the film is genuinely shocking. I was cringing during Hammer Girl’s introductory fight scene aboard a subway, and I’m not the type who gets squeamish watching horror movies.

Overall, The Raid 2 delivers the goods and so much more. This is the sequel The Raid deserves, and it’s the type of sequel all filmmakers should strive to make. See it in theaters while you can.