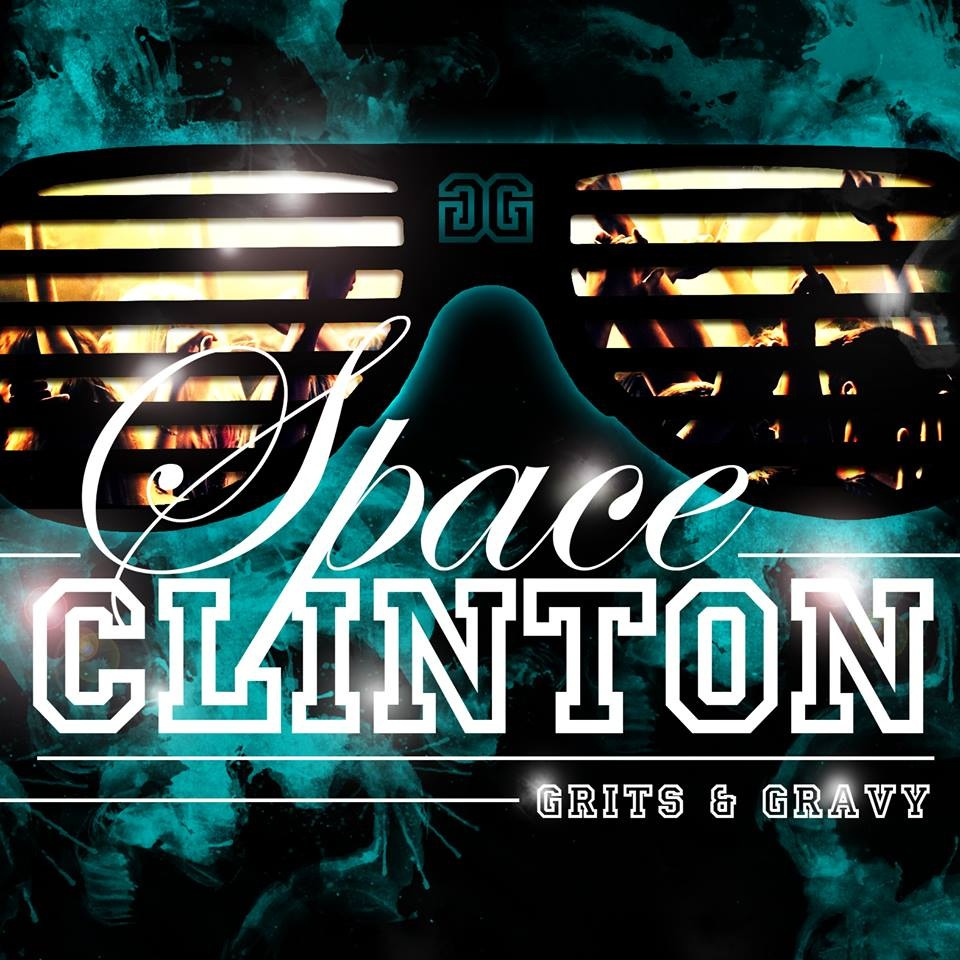 Since their early releases, Grits & Gravy have found a unique perspective on hip-hop to explore in their music, focusing on every aspect in an academic and technical way.  Each recording since has further developed a different focus and through that, a different style.

The duo’s newest release, Space Clinton, continues their exploration adopting more atmospheric, electronic direction. Despite the shifting focus, the central elements are foundational and keep the sound consistent and familiar to the rest of their discography.

The tight, punchy percussion, deep bass and other rhythmic elements are provided by producer and percussionist, Neal Titus, keep an energetic, upbeat feel throughout Space Clinton, an element that has been constant and fundamental in the Grits & Gravy sound.  Titus’s style has evolved from his background playing live percussion.  During live shows and in the studio, he plays his drum machine and sampler like he would any other percussion instrument giving a human sense of rhythm, rather than the rigid, mechanical timing of a drum machine playing premade drum loops. The human element also carries over into many of the samples that fill out the rest of the instrumentation as many of them are played and triggered live.

On Space Clinton, the production is built from many electronic elements that are commonplace in the hip-hop world, but the overall sound ends up very different because of the fluidity of Titus’s performance. The entire record has a life and energy that doesn’t sound flat and robotic that is rare in hip-hop and producer music.  While many familiar elements are still present in the beats, the focus tends to fall on the synthesizers and electronic samples on Space Clinton, rather than the more organic sounds on their previous releases. Though such a large change in influences usually causes musicians to largely shift their aesthetic, the organic nature of Titus’s work keeps the sound familiar and distinctly Grits & Gravy.

While the production is critical to the mood and energy of Space Clinton, the vocals, provided primarily by Marcus Steward, AKA GiovanniRaps, are equally important. Steward’s tight flow and sense of rhythm add to the tracks as much as any instrumental element. Because the pair writes the songs together, both have an opportunity to play off of each other and keep the tracks varied and dynamic, constantly changing and unpredictable.

The strongest and most compelling aspect of Steward’s raps is his honesty and sincerity in his lyrics and delivery. Instead of building his lyrics around a few quotable lines and meaningless filler, those aspects make every word part of something compelling and meaningful. Even when his lyrics are about the cool things he’s doing or the expensive stuff he has, he sounds like he’s simply talking about the things he enjoys, not boasting about having more than someone else. Rather than constantly comparing himself to other people, his lyrics focus on who he is and why he embraces that passionately. In a genre filled with perpetual “one up-ing,” it’s refreshing to hear someone who is secure enough with himself to be genuine in his music.

Overall Space Clinton is the tightest and most focused Grits & Gravy has ever sounded and shows that, despite a very strong start, the duo has just begun to tap their creativity and inspiration. And while the recording is excellent, their live show breathes even more energy and intensity into the songs. The group regularly plays concerts around Colorado, including a set opening for Nappy Roots at the Moxi Theater in January. Titus’s style lends well to live performances and makes him as enjoyable to watch as a drummer. Steward is also a passionate performer and his movements and expressions add more meaning to his words. The pair interacts well together during songs, getting the crowd moving and as excited about their music as they are.

Grits & Gravy have a strong history and have only gotten better at their craft as they have had more time and experience. Space Clinton is a great direction for Titus and Steward, expanding on their already solid core elements and drawing from a larger circle of influences.

Check out Space Clinton on Grits & Gravy’s Soundcloud and upcoming concert dates on their Facebook.