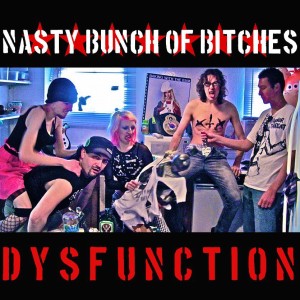 Punk rock is a subjective term encompassing various styles, eras, and bands. Kurt Cobain believed “Punk is musical freedom. It’s saying, doing and playing what you want.” By this definition, punk will never die. So despite a seeming scarcity of relevant punk bands in the local and national music sphere these days, the spirit of punk lives on in a band called Nasty Bunch of Bitches.

As their name naturally invokes a sense of unadulterated expression, so too does their music. Their forthcoming EP, entitled Dysfunction (released June 1st release), displays a range of musical stylings, while sustaining the steadfast energy that is the essential core of all punk rock.

Some of the band’s musical influences include: No Doubt, Anti-Flag, Rancid, The Ramones, and Rise Against. While the lineage of these and others are apparent, Nasty Bunch of Bitches’ music is teeming with originality.

Thanks to a diverse group of individuals, their musical blend is all their own. Their lineup consists of Kayleigh “Jack Stallion” Gustkey (vocals, lyrics), Brett Caton (guitar, vocals), Michael Olivier (guitar, vocals), Sotirios Gatsiopoulos (drums), and Sam Rucker (bass).

As to the question of the impetus of this band’s formation Olivier said, “No one in northern Colorado is doing punk rock anymore.”

That void has been filled with such tenacious songs as “Nose Candy,” which leads off the six-song EP. Remnants of early No Doubt echo throughout, as this catchy song beckons you to move in unison with the beat, the melodies, and the emotions.

“As much energy from the first note to the last note, while being uniquely ourselves,” is how Olivier described their album and live performances.

The high point of Dysfunction is undoubtedly the song “Significance.” The beauty of this track is the enlightened amalgam of punk rock’s energetic spirit and deep philosophical questioning, creating an inspiring anthem for the human spirit.

With songs like “If My Body’s A Temple Why Can’t I Worship It,” the band doesn’t mince words in the pursuit of delivering their meanings. And while they invoke many strong stances relating to human rights, the transcendental impact is far deeper than any one social issue.

“We don’t want to tell kids what to think, we just want to tell them to think.” said Olivier about the political nature of their music.

It would be fascist to dictate to an audience exactly what they should be thinking, not to mention entirely antithetical to the liberated nature of punk rock. But to simply engage honestly with people through their music enables a vibration seldom felt in the arena of social discourse.

And that’s the hook of this brand of punk rock: it’s honest. When a power chord awakens your senses and a lyric slices through social inequity with a single rhyme, you know it’s punk rock. When you hear the name Nasty Bunch of Bitches, you know you won’t be getting any fluff. But much more than that, with this band, you know you’re getting something from their soul.