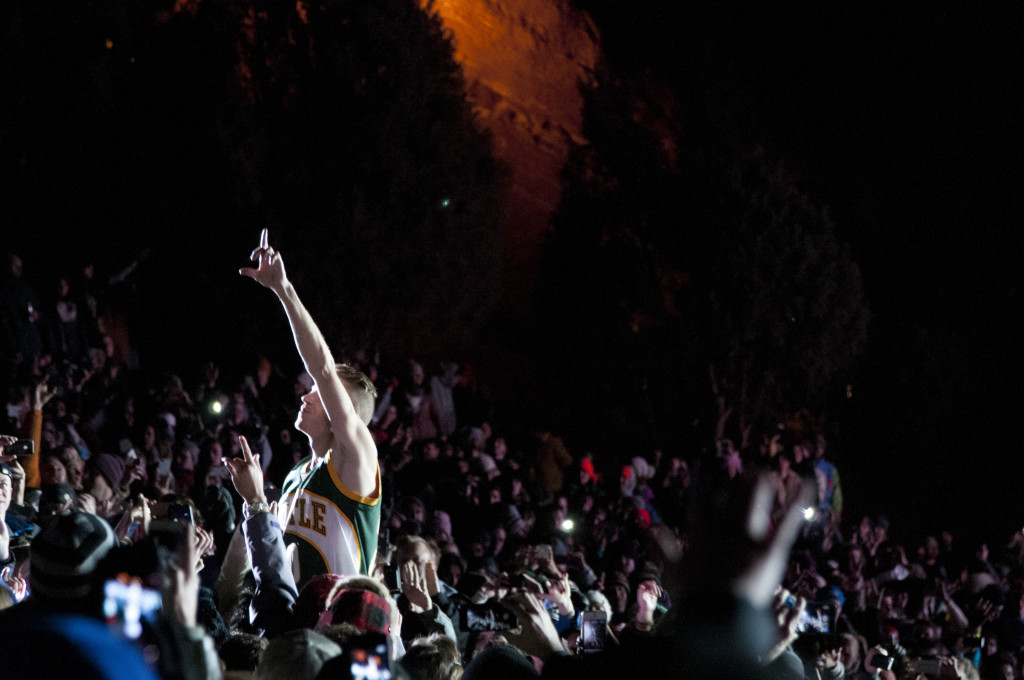 Macklemore’s career is proof that you can work hard enough to earn your place in the spotlight. Ben Haggerty, the rapper known most commonly as Macklemore, found his love for music and began writing rap in his teens. He recorded and released first EP, Open Your Eyes, in 2000 as Professor Macklemore, though he removed “Professor” from his name before releasing any more material. In 2005, Haggerty released his debut full-length album, The Language of My World. The album began to draw a following for Macklemore, largely through the Internet and in his home state of Washington, including fellow Seattle native Ryan Lewis.

Lewis met Macklemore shortly after the release of The Language of My World, though the pair would not officially begin their collaboration for several years. Haggerty suffered from substance abuse problems for some years after the album’s release, which led to a stall in his musical work.

Lewis was pursuing a career as a photographer, a skill that gave him a chance to get to know Macklemore through photo shoots. He eventually began to focus his attention more on music, though his knowledge of visual art gave him the opportunity to direct videos and design visuals with Macklemore. As a producer, he first recorded his own album, Instrumental, which was released in 2008, the same year that Macklemore decided to get sober and began reorienting himself toward creating music. Over the years that the two had known each other, they spent some time working on music, but Macklemore’s new-found clarity led him to begin a partnership with Lewis.

Haggerty recorded his 2009 record The Unplanned Mixtape independently but immediately followed with The VS. EP, his first creative effort with Lewis, the same year. The content of Macklemore’s lyrics on these releases developed from his newfound sobriety and began to take on larger issues than much of the hip-hop community. The VS. Redux was released in late 2010 and, though they already had garnered a large online following, marked the duo’s first real breakthrough as a rising act. The record made it to No. 7 on the iTunes hip-hop chart and greatly expanded their fanbase and media coverage.

Though a successful string of singles continued to come from the pair, allowing for larger tours and more recognition, things didn’t always go smoothly. In December of 2011, Haggerty relapsed after missing AA meetings due to constant touring and codeine cough syrup, prescribed to him for a cold. Though the relapse slowed the release of new music, it ultimately fueled their desire to finally release a full-length album, The Heist, which was announced in the summer of 2012. The announcement was accompanied by the release of the new single “Same Love.” The track, which expresses disappointment in homophobia, especially within the hip-hop community, established Macklemore’s support for gay rights, found success, and resonated with many listeners.

On October 8th, 2012, just a day before the release of The Heist, Macklemore and Ryan Lewis released their single “Thrift Shop” to immediate success. The single charted at number 1 on the Billboard Hot 100 list and eventually was certified Double Platinum, while the album reached the number 2 on the Billboard 200, just behind Mumford & Son’s Grammy-winning album Babel. Several notable artists are featured on The Heist, including Schoolboy Q on “White Walls” and Ab-Soul on “Jimmy lovine.”

In support of the album, the duo embarked on a worldwide tour selling out over half of their stops in the U.S. The consistent radio play of “Thrift Shop” continued throughout the end of 2012 and continues today, remaining in rotation on both hip-hop and alternative rock stations, drawing comparisons to the Beastie Boys’ cross-genre popularity. Macklemore has been criticized and praised for the lyrical content of the single as being both trivial and a refreshing viewpoint. With the continuing popularity of the single, it was no surprise that Macklemore and Ryan Lewis sold out their February 1st show at the Red Rocks Amphitheater and that they became a sought after act for the University of Nothern Colorado’s spring concert. Just a few days later, the University Program Council announced that they would be bringing the pair to UNC to perform on Sunday, March 3rd as part of MTVU’s “Woodies Tour.” Unfortunately the show is already sold out, so you may have to resort to hunting for tickets on Craigslist or praying for a friend with one to come down with something that night, but either way it will be a show you don’t want to miss.