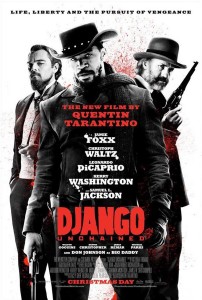 Oscar season is upon us, and this year there is slightly more controversy than usual surrounding the film industry’s celebration of the Best of the Year. While much of it is regarding whether Zero Dark Thirty director Kathryn Bigelow is endorsing torture with her dramatization of the capture of Osama Bin Laden, there have been other flare-ups, including the exclusion of what many considered to be shoo-ins for Best Picture. One such film being Quentin Tarantino’s homage to the western genre, Django Unchained.

Taking place a couple years before the Civil War, the film opens with Django (Jamie Foxx of Ray) in chains with other slaves, being dragged through the South by a couple of handlers. One night, the group crosses paths with Dr. King Schultz, (Inglorious Basterds’ Christoph Waltz) an unassuming, sophisticated German dentist who’s keen on acquiring a slave: Django. After a tense standoff with the handlers, Schultz shoots them and frees Django and the other slaves.

Schultz’s motive to freeing Django? Schultz is a bounty hunter looking for the Brittle Brothers, who used to be Django’s owners. He makes Django an offer: help him find the Brittle Brothers, and Schultz will set him free. Django agrees on one condition, though: he wants Schultz to help him find his wife Broomhilda (Kerry Washington of Scandal.) As they set about tracking down the brothers, Django takes up Schultz’s trade and eventually finds out Broomhilda’s being relegated to a prostitute at the Southern plantation known as Candieland, run by slave owner Calvin Candie (Leonardo DiCaprio of Inception.) Freeing Django’s love, however, isn’t exactly easy.

Django is far more humorous than Tarantino’s past work, even though this is the furthest thing from a comedy. He traffics in black comedy in all of his films, but here it seems as though he’s eased back a little and is having fun shooting an homage to the spaghetti westerns he grew up watching, unlike Basterds, where he was shooting for the Oscars.

The chemistry of the cast helps with that. Foxx as the hero Django – “the D is silent.” – is awesome, and the way he plays off of Waltz’s Schultz is fantastic. Foxx’s Django starts off as a slave who doesn’t have much of an education and ends up being as sophisticated (and deadly) as Schultz. The learning process in between is peppered with humorous moments such as banter between them about what “positive” means when they sight one Brittle Brother getting away on horseback – the punchline being, “He’s positively dead.”

DiCaprio as Candie is crazy good. He plays an unsophisticated Francophile who is a complete Southern-Fried Dandy and has a possibly incestuous relationship with his sister, but is also a man to be reckoned with. Candie is aided by his cantankerous House Servant Stephan, played by Samuel L. Jackson, who has nothing but hatred for Django for being a freed man. Jackson being Jackson, he holds his own in the film and is probably the most terrifying man in the movie.

Kerry Washington, as Broomhilda, doesn’t really have a lot of screen time until the halfway point, but when she’s on screen she owns it. The glee in her eyes when she’s finally freed from Candieland is something to see.

My only complaints about Tarantino’s film is that it’s a little long. When Broomhilda gets freed, that’s when the movie should end, but instead it goes on for another 40 minutes. It’s an awesome 40 minutes, but the film could stand to be shorter. Overall, though? Django Unchained should get more than Best Screenplay at the Oscars. 9/10