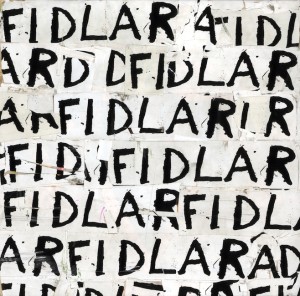 Step aside, LMFAO; the real party rock has arrived. Los Angeles-based surf punk band FIDLAR (Fuck It Dog, Life’s a Risk) dropped their debut, self-titled album on January 22nd with Mom + Pop Records. Their brand of party rock is a bit more chaotic than the dance club sound of LMFAO, though. This is party rock for those parties where there’s more coke than beer. FIDLAR is the kind of album that makes you want to drink beer just to keep up.

The four-piece band is comprised of Zac Carper (vocals and rhythm guitar,) Elvis Kuehn (vocals and lead guitar,) Max Kuehn (drums,) and Brandon Schwartzel (bass.) Their first full-length album features rerecordings of some songs they originally released on their EPs, Don’t Try and DIYDUI, as well as “Cheap Beer,” released as a single in 2012. It also includes the same number of original tracks that will not disappoint old fans or first-timers.

The first two tracks, “Cheap Beer” and “Stoked and Broke,” introduce FIDLAR’s ethos to the world. These guys stray from the punk bands who paved the way for this kind of music. They eschew the political and social commentary in favor of a hedonistic view of the world. FIDLAR love to get fucked up, and they don’t care what you think of it—succinctly put in the chorus of the first track: “I! DRINK! CHEAP! BEER! SO! WHAT! FUCK! YOU!”

Their music matches their lyrics: strong beats that are as danceable as they are moshable, with loud, crunchy guitars, rapid-fire power chords, and lead riffs that make you bang your head. “No Waves” shows this off perfectly, pairing Carper’s laid-back vocal style with Kuehn’s high-pitched tremolo lines on guitar and a powerful rhythm section.

“Blackout Stout” showcases Elvis Kuehn’s voice, more melodic than Carper’s and fuller, evocative of a Beach Boys sound (if they’d been a punk band in the mid-eighties.) The song’s jangly rhythm guitar and the tone of Kuehn’s lead guitar both lend a surf rock sound, one which appears in many of FIDLAR’s more relaxed tracks.

And we need those tracks, if only as a reprieve from the high-energy head-bangers that populate most of the album. “Wake Bake Skate” blasts listeners with a double-barreled assault of power chords and Minor Threat-style screaming from Carper, but it is followed by “Gimmie Something,” a much mellower song that has Carper laying off the shouting again, as in “No Waves.” This is FIDLAR’s take on the early ‘60s pop style of bands like The Beatles. Kuehn has a short, bluesy solo here that fits right in.

If you’re looking for a new sound to pump you up for anything from a party to a workout, get this album. FIDLAR are poised to take off like a rocket as they continue their high energy/low expectations style of rock, and their debut album is proof that they can deliver.