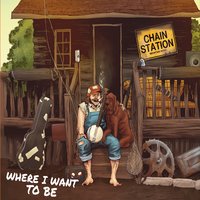 Chain Station is a bit of a novelty for us here at BandWagon: It’s a four-piece band consisting of all string instruments. This proud bluegrass band – consisting of Jarett Mason on the mandolin, Jon Pickett on bass, Alex Thoele on guitar, and James Weatherly on Banjo – is held together by the harmonizing voices of Mason, Pickett, and Thoele and the fast-paced picking of all four members. Where I Want To Be, released in 2016, is probably the most pure bluegrass album we’ve heard in some time.

Now eight years old, Chain Station has put out three albums since their first in 2013 (This includes a live album in 2015) spending most of their time on the road performing. That level of practice explains just how tightly constructed their tunes are on Where I Want To Be; never an off harmony or a wrong pick. This doesn’t sound like a produced album, though it is, but more a well-done live recording of the four members playing their songs in one take. It’s natural sounding and unadorned. The energy these guys bring in their music is infectious, likely to make listeners in country watering holes get up and dance.

Where I Want To Be isn’t perfect though. “Wide Right Turns” is a pretty generic truck-driving song which isn’t terrible, but isn’t very original. Being from Colorado, the guys put together a song called “Find Your Own,” which kind of sounds like the music equivalent of those “Native” and “Go Back To California” bumper stickers you’ll see at least once a day in Colorado. Despite these faults, Where I Want To Be is still a solid bluegrass album, rife with energy and excellent singing and string-picking. Those looking for a relatively new bluegrass outfit should absolutely give Chain Station a shot.