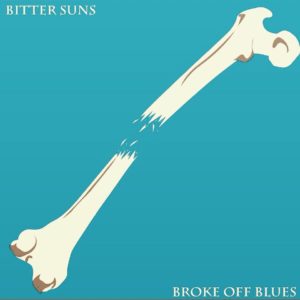 Those damn Bitter Suns punks are at it again! They finally took some time off from defacing public spaces and cruising skate parks to record a five-track EP and it’s a doozy. Broke Off Blues is a tribute to all those crusty kids you see lurking on the fringes of society. Kids who live by a simple code that gives you one choice: skate or die.

Bitter Suns are on to something with Broke Off Blues. Produced by Alan Hlavacek of the Ft. Collins band Attack On Venus, the tracks are tight and the guitar tones crisp, making a fine punk record. It’s less of a ‘fuck the man’ style of punk and more of a ‘what’s your damage dude, I’m trying to get pitted with my boys’ sound. The song “Pitted” summarizes the whole vibe of the EP (and the band) with lyrics like; “yesterday I got totally pitted, it’s been a while since I’ve been this broke off.” Not exactly Shakespearean level poetry, but coupled with the rich punk instrumentals throughout, it hits the mark more closely than if they sang about something they didn’t care about. Plus, it’s fun, which for Bitter Suns is the bottom line.

In addition to the fun, what’s great about these guys is that they’re not pretending. So many of their peers are focused on making serious music (which is great, by the way) but for Bitter Suns it’s about the simple pleasures they know in life. It’s about cracking open that PBR and taking your favorite deck out, because at the end of the day your true friends are your band and your skateboard.

Bitter Suns take their skate-or-die mentality to the next level with a healthy midwest tour in the months after their EP release on May 25th at Pinball Jones.