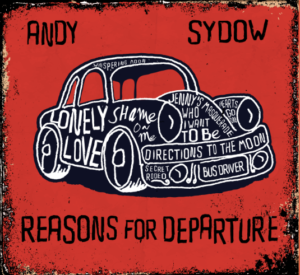 At age 26, Andy Sydow has already put out four albums since 2013, Reason for Departure being his newest. BandWagon Magazine hasn’t heard much of his stuff, but his new album, a relaxing rock album rife with blues touches – possibly thanks to album producer and guitarist Chris Daniels of Chris Daniels & The Kings – is not a bad introduction to the Denver-based singer-songwriter.

The hype sheet that came with the album places Sydow’s latest in the Americana genre. We understand why, but Reasons for Departure is not Americana in the traditional sense. It’s more along the lines of blues-influenced Classic Rock of the ‘70s. Sydow’s piano playing, in particular, tends to bring to mind Billy Joel. (“Bus Driver” sounds like a mix of Joel and Pete Townshend). The organ playing of Luke Maxson in the background on most of the album contributes to that ‘70s taste, as does Sydow’s raspy/twangy vocals. Combined with Sydow’s Pop-ish lyrics (which are really good, to be honest) the album is easy listening done right. You are put at ease when you put it on. Your worries melt away when you lean back into your favorite chair and let Sydow’s lyrics and piano playing whisk you away for 40 minutes.

If you’re looking for something along the lines of Billy Joel and Pete Townshend, you should absolutely give Andy Sydow’s Reasons for Departure a listen – the album is due out this month.