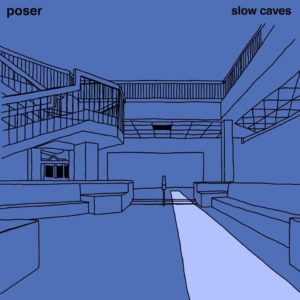 Poser / Rover sets cruise control smack-dab between Morrissey and Ric Ocasek era Weezer, with both tunes coasting in at a steady 135 bpm. It’s just enough drive to let your hair blow in the breeze – like a Mac Demarco tape was in the deck as you drove down Colfax to Poser / Rover’s release show a few Fridays ago.

Glossy production awash in tasteful reverb, Beach Boys “oohs” and frequent whammy bar dips are expected road signs for Slow Caves, but a favoritism for minor 6th chords breaks up the four-on-the-floor rock, acting as indications of “curves ahead.”

“Your acid wash is so classic posh . . . I’m a poser – yeah that’s me,” side one says. It’s an homage to band-mates Jakob Mueller and Jackson Lamperes’ early days on the Ft. Collins skateboard scene; a realm where ridicule forced them to “carve out their own identities” according to Mueller.

Maybe Slow Caves are posers – with a facade of California cool luring us towards their effortless vibe, when in fact, repeated listens reveal the articulated details of a band with very particular intentions. Mueller’s baritone croon gives us those “depth behind the beach-rock party” feels too, while Rover’s obscure Simpsons reference to Jimi Hendrix’ posthumous, wandering dog, shows there is thought behind the rock – however goofy.

Whatever the mystery behind the appeal, Slow Caves deliver the goods and the fun on Poser / Rover. Their head-nodding rock satisfies those of us already craving spring/summer guitar jams, proving they’ve got a long, sunny highway ahead of them. We can’t wait to hear where they’re taking us next. Skate or die, dog!