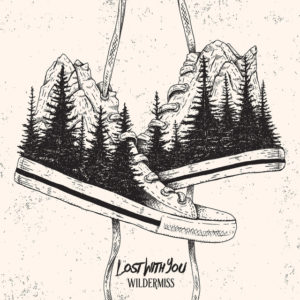 First looks at front-woman Emma Cole and crew on stage may conjure comparisons to the likes of Sylvan Esso (who Wildermiss routinely cover live), but don’t be fooled. This female-led synth-bass band are shoegaze guitar kids at heart – Heart they carry all the way through their debut EP Lost With You.

In the tradition of bands like Metric, Cole’s feminine vocals drift through proper rock-band structures set forth by drummer Caleb Thoemke and guitarists Seth Beamer & Joshua Hester, though taking a dominant role as hook-master. That said, the foursome each contribute compelling and noticeable edges to the mix with their rare twin-guitar, no bassist set up. The band’s aforementioned tension keeps the pop-repetitions of “Lost With You” feeling like they’ve always been a part of you.

Full-on indie-rock guitar chops and rim-click drive are brought to the EPs opener “Between Two Rooms” – a telling relic left over from the band’s pre-frontwoman days as Red Fox Run. A waterfall of major guitar scales breaks up an “oh oh oh” rollercoaster pre-chorus with the punchy half-time hook of “I – I – I can’t seem to get this right – it never ends.”

“I fell in love with you today,” the innocent beginnings of “Carry Your Heart,” find unexpected harmonic twists upping the emotional ante at its epic finish. Yet, a toy-piano / hand-clap breakdown of the chorus and a signature triple-shout of “hey” reminds us we’re really just hearing four friends making music together.

“Vivian” begins with a Television-like stereo guitar syncopation framing Cole’s ethereal, wordless chorus with atmosphere akin to Death Cab For Cutie’s Transatlanticism. Here, her voice comes from dark corners without consonants to bursts of crisp, hook-laden sunshine in an instant.

“Keep It Simple,” arguably the most memorable contribution off Lost With You, gives us an undeniably catchy “ooh ooh” hoot as it’s hook; like a coffee-house singer’s song turned dance-floor holler.

A final push of delayed guitars provides a bed for the EPs finale “Pieces,” which finds us awash in a stardust middle-space between “Anthems For A Seventeen Year Old Girl” by Broken Social Scene and Interpol’s “NYC.”

Wildermiss’ mix of intimate vocals, ingenue synth-pop, and kids-with-guitars-in-the garage make them what they are above all else: likable. The energy and honesty in Lost With You make them a team you can’t help but root for. Get ready to press (you guessed it) repeat.

Catch Wildermiss on January 11th with Pandas & People at The Bluebird Theater in Denver.