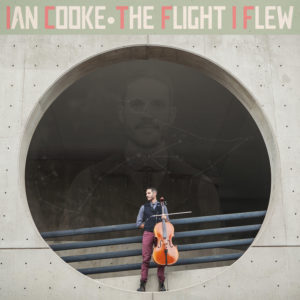 Denver music scene icon/Greeley kid Ian Cooke leaves us with a night-sky full of memories after 15 years. The Flight I Flew is an homage to his 2007 debut The Fall I Fell which put him on the cello-based prog-folk map in Colorado. There’s a map for that, right? The new album, allegedly written under starlight exclusively, parallels the vastness of the cosmos with that of love lost and found, released upon Cooke’s end as a Colorado resident this fall.

“Feel Every Move” evokes an almost “Eleanor Rigby” pomp beneath Cooke’s nimble melody which “gains velocity” as it expresses his mastery of the musically complex. His compositional risks take the listener on a well-worth-it journey across his emotional universe.

“Nine Moons,” the record’s emotional peak, swerves through uncertain piano plinks in a minor key landing us on a Beatlesque, jazz-shuffle verse. Arpeggiated keys and percussive sunlight-swish heighten our feelings in the break, eventually twisting towards the climax of Cooke’s heartfelt falsetto: “I know I’ll never love anyone the way I love you.”

There is an innocence and awe in Ian Cooke’s music. He is a true musical individual who manages to weave heart-on-sleeve honesty through a dance-like tapestry of melody, rhythm and lyrical intrigue. Those searching the skies for unexpected beauty need fly no further than this.