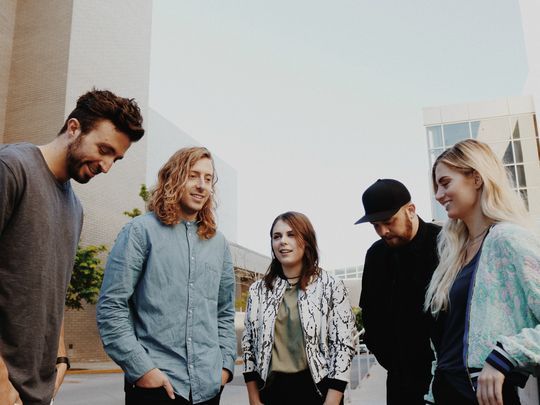 Brady Parks, vocalist and songwriter of The National Parks, was drawn to folk music by the storytelling aspect of the genre. “There is something about telling a whole life story in a three minute song,” he said in a recent interview with BandWagon Magazine. It’s this love for folk music and conveying himself artistically that eventually led him to form The National Parks in 2013 and there was no turning back.

With three albums under their belt and 13.2 million plays on Spotify, Parks has turned his folk-pop outfit into a national presence. Drawing early inspiration from bands such as Fleet Foxes and Bon Iver, The National Parks uses strong male/female vocal melodies over guitar, violin and drum arrangements that have made them both accessible and noteworthy. Underneath the music is Parks’ story-driven lyrics that have been the foundation of their songs. On all three albums, he demonstrates his ability to turn a phrase and speak to the heart of matter.

The name The National Parks is not just a clever band name for Parks. Living close to the Grand Tetons, he spends a lot of time out in nature, taking in what he can. “I think there is something about nature that is connected to our moods and relationships… Sometimes I like to drive up into the mountains with my guitar and find a place to work on stuff,” Parks said.

With a degree in Advertising and Graphic Design, Parks pretty much has the best possible education to prepare him for a career in the modern music industry. Visual art also serves as a counterweight for Parks for when the grind of playing music begins to get to him. “Sometimes when I need to take a break from working on music, I’ll work on some concert posters or something. It helps me center myself, I think,” Parks said.

Originally from Parker, Colorado, Parks moved to Utah to attend Brigham Young University not knowing how much his life what about to change. While getting his degree, he wrote several songs that would lead to the forming of a band. Then, one lucky night at a Battle of The Bands at their home venue in the Velour in Provo gave them the boost they needed to reach a new level. After some lineup changes, Parks formed The National Parks in 2013 and released their much-anticipated debut album Young.

Still living in Provo, when not touring, Parks likes to spend his time either watching Netflix or being outside, particularly hiking or playing basketball. Speaking with Parks, it’s clear he’s thankful for the success he has found and enjoys what he does. “I love coming to a place we’ve never been before or only been to a few times and seeing people really get excited about our music,” he said.

Currently on tour supporting their third album Places, you can catch them playing the Moxi Theater on Tuesday, November 7th.