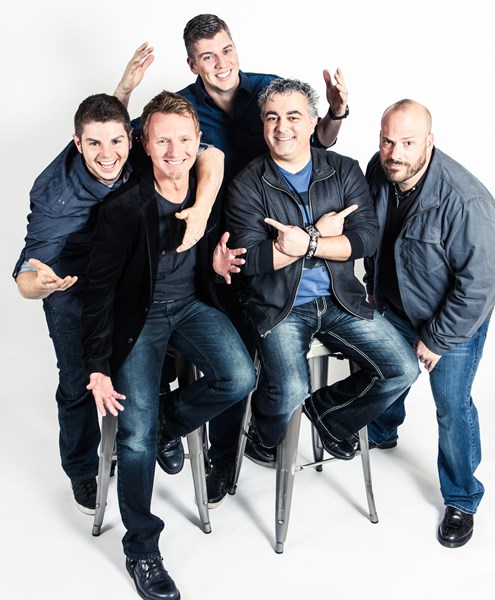 They’ve been booked before Jay Leno, Bon Jovi, Reel Big Fish and recently the Barenaked Ladies at the Greeley Stampede, and they did it all with only their voice.

Face, an A Cappella group out of Boulder, have been rocking crowds since their debuted in the early 2000s. Initially formed in 2000 by Ben Lunstad and Joseph DiMasi, the “vocal rock group” has performed on America’s Got Talent and Sing Off, held shows across the world, have put out six albums, a concert film and a live album recorded during their European tour; their latest album Big Time was released in August when the group headlined Red Rocks.

DiMasi and Lunstad are no longer with Face, leaving the group with five members: Tenor Ryan Driver, Bassist Forest Kelly, Countertenor Stephen Ross, Vocal Percussionist (i.e. Beatboxer) Mark Meglbow and Tenor Cody Qualls. BandWagon got the chance to speak with Qualls and Meglbow in the lead-up to their upcoming show at the Moxi on November 17.

“Most of us knew of each other through the CU Boulder A Cappella scene,” Qualls said. “While we all like vocal music, none of us are super A Cappella nerd. We are more of a bunch of rockers and pop artist who somehow ended up in an A Cappella group. So we decided to brand ourselves as a ‘vocal rock group’ and it took off. We are the single most successful vocal group in Colorado history, as far as we know. We feel very lucky and humbled by it all.”

Meglbow, one of the original members of Face, said he was introduced to contemporary A Cappella while at Northwestern University. Furthermore, Face isn’t the first A Cappella group Meglbow was involved with.

“I was a founding member of a quartet that, like Face, focused almost exclusively on rock music,” he said. “It was one of my favorite things I did during my college years, so when the Face opportunity came up, I was pretty excited to get back into it.”

At the time he joined circa 2001, Meglbow was still practicing his beatboxing abilities, so he had initially joined as a tenor and split beatboxing duties with another member who left the group. Qualls said he joined Face I 2002 after his rock group, Kindred, broke up.

“I was busking up on Pearl Street Mall in Boulder for tips with Joe DiMasi asked me to audition for Face,” he said.

Currently, Qualls is one songwriter for Face, the other being Kelly, as well as the head of the market growth and outreach for the band, while Meglbow acts as an interpersonal business relation lead alongside his work as the ‘drummer’ for Face.

“Although I;m not one of the arrangers or songwriters,” Meglbow said, “I still create all the drum parts for every song, which as a former rea; drummer comes very naturally to me. The songwriters and arrangers frequently give me some direction in terms of tempo and general feel, but then it’s up to me to figure it out from there. In addition to that, I’ve always loved taking care of Face communications. I still write and send the newsletters to our email list.”

For more information on Face, visit their website at facevocalband.com. Those in the Greeley area can see Face perform at the Moxi November 17.