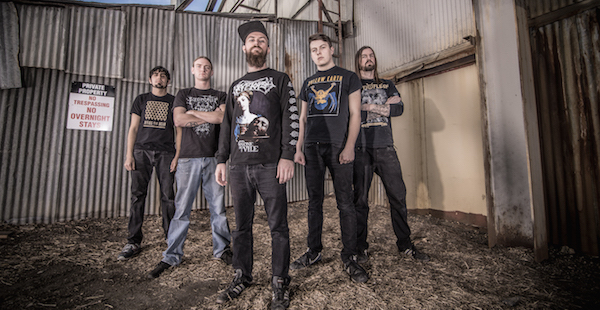 It’s great to see when Colorado bands ‘make it.’ Touring year-round opening for huge bands, playing big festivals, and shredding for the impressionable youth. However, it’s not always easy for those bands to continue playing music because of how tough the music business really is. The reality is that until you reach a certain level, things are well… financially underwhelming. Touring is also extremely dangerous from all the time spent driving, and longevity is nothing but an uphill battle while most lucky and successful metal bands only become self-sufficient… if they stay together.

After their first independently released EP in 2008, Allegaeon (pronounced uh-lee-juhn) released their first full-length record on Metal Blade records in 2010. They have since released three more full-length albums in just over five years with the label. Allegaeon is putting in the leg work too; touring the country year-round with bands like Act of Defiance, Chimera, Job For a Cowboy, and Whitechapel.

As is commonplace with many bands at their level, regardless of their apparent success and obvious work-ethic, Allegaeon was struggling financially and recently asked their fans for some extra cash each month in order to keep the ship afloat. When they launched their campaign on the crowdfunding platform Patreon, the story was picked up by metal blogs like MetalSucks ad Lambgoat. Currently, the campaign is netting the band around $3,800 per month from over 300 fans which is not a ton of money, but certainly goes a long way for a band like Allegaeon each month.

Allegaeon made more headlines when Mish Barber-Way, vocalist from Canadian band White Lung, called the band “…the laziest, most pathetic, sub-human beta males in America,” and plenty more in a column she wrote for the website Cirvynt suggesting the band reevaluate their “…internal business management, cutting expenses, working a day job and being FUCKING REALISTIC,” reacting to the recent crowdfunding campaign and the attention it garnered.

The consummate professionals they are, Allegaeon was quick to dispel the quarrel. Vocalist Riley McShane got the Canadian rocker on the phone within a day of the story going viral and guitarist Greg Burgess was imploring furious Allegaeon fans to stop sending death threats to the abrasive author. McShane made it a point to squash the impending beef shortly after it began,

“Funny story. At the end of that article she was like ‘if this article offends you please feel free to contact me,’ all this kind of stuff, so I did… she was awesome, I’m not gonna lie. It was a very good conversation. She gave me the room to clear the air, all while expressing what her points were and at the end of it, she was like ‘you know, I’m really sorry. I should have talked to you guys first about everything, I was just standing in an airport drinking wine and like writing it on some tiny website, I had no anticipation that it was going to blow up to the extent it did.’” said McShane in an interview with MetalSucks, of the critical frontwoman.

Most recently, the band parted ways with long-time bassist Corey Archuleta after the original vocalist, Ezra Haynes, left the band in 2015. Member changes are inevitable with most any band that experiences the kind of longevity that Allegaeon is now approaching. “I want to be a music and entertainment lawyer,” said Archuleta, leaving the band after realizing that he couldn’t be an active member of the band and attend law school at the same time.

Creatively, the band is fresh off the release of their new full-length record that they recorded with Archuleta and their new vocalist Riley McShane, called Proponent for Sentience. The album was recorded with metal producing king, Dave Otero at Flatline Audio, and the band released a new music video alongside new play-through videos in support of the new record. Sonically, Allegaeon is very much staying true to their roots most of the record while incorporating several new elements into the band’s musical palette. Long time fans can be sure to expect the same face-melting riffs and epicly stoic breakdowns, but while familiar at times the album is a divergence from previous releases.  From several instrumental intermissions and technical acoustic flamenco guitar tracks, to the clean vocals that shine brighter towards the tall end, this new record stands out. The 12-track epic ends with the closing track, a RUSH cover, “Subdivisions.” Originally the band wanted to release it as a bonus track for international markets and that’s why the label had them record it, but the band ended up putting it on the album as the last track for everyone to hear. Perhaps this sort of sound, which is a clear departure from the norm, is a taste of what’s to come from the band? “I think it showcases a lot of things that we want to do as a band,” said McShane in a recent interview with BandWagon Magazine. “We won’t be diving head first into that (sound) moving forward but we aren’t just a death metal band.” With each record Allegaeon expands their legacy and becomes an even greater staple in the American metal music scene.

The band is currently touring in support Proponent for Sentience. You can catch them live at the Metal Blade 35th Anniversary Tour at Summit Music Hall, March 6 in Denver and again headlining the Moxi Theater in Greeley on Friday March 31. See you fans at the show.