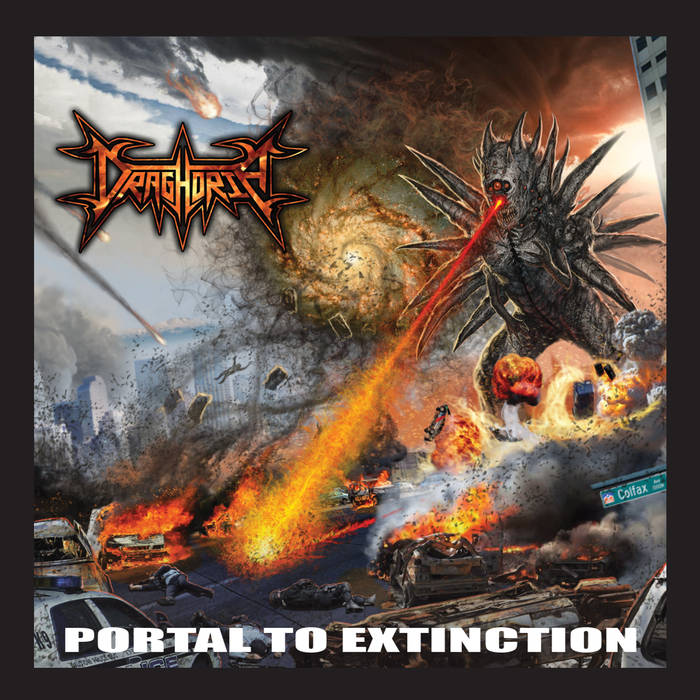 In an age where it is becoming increasingly uncommon for a band with high-energy live performance to be able to showcase that same intensity while in the studio, Draghoria is a breath of fresh air for the metal scene. At just slightly over 40 minutes, their long-awaited debut album, Portal to Extinction, is eight tracks of madness. Recorded by Greg Keenan at Sound Minon Studio in Longmont, the quality and attention to detail is what sets this album apart from others. From the moment the opening track, “Suicide Serenity” hits your ears, it is clear that this record is not for the faint of heart. With subject matter ranging from the mass shootings plaguing America on “Kill or be Killed” to inner demons on “Awaken the Wicked,” Joes Brim delivers a brutal vocal style that is in-your-face and straightforward.

On tracks such as “Crowning the Tyrant” and “The Witches of Salem” it’s obvious that guitarists Ron Carrillo and Ryan Nevins share the same chemistry in the studio as the do on stage. “The Visitor” is a three-minute acoustic instrumental by Carrillo, which shows the band’s willingness to experiment and venture outside the boundaries that metal bands can often find themselves within. Bassist John Colucco delivers solid bass lines throughout the entire recording, with the strongest being on “Welcome to the New Hell.” The youngest member of the band, drummer Alex Carrillo, plays with such intensity that his style can be compared to that of early Slayer and Metallica recordings.

With their debut release, Draghoria delivers a hard punch to the face, and shows why they are on the forefront of the Colorado metal scene, and well deserving of the title ‘The New Wave of American Thrash.’ More details about the album, as well as info about upcoming shows can be found at www.facebook.com/draghoriathrash.