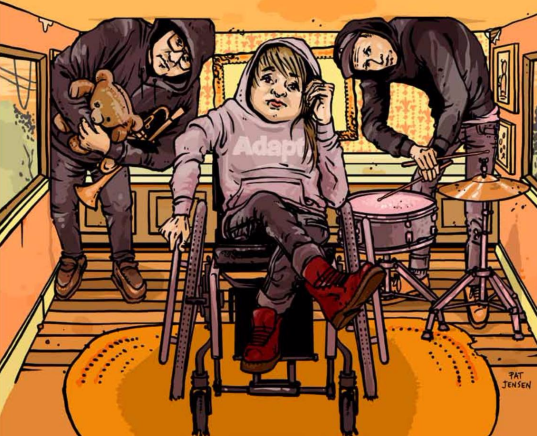 For Denver-based MC Kalyn Heffernan, life has never been easy. Born with brittle bone disease she’s had to endure countless surgeries in a lifetime of judgment due to her, what she calls “CripLife” (short for crippled life), but that’s who she is- witty, funny and bursting at the seams with personality, especially when she grabs the mic. The results are nothing short of explosive.

As the lead MC for the jazz-infused hip-hop trio, Wheelchair Sports Camp (WSC), she’s experiencing a reality she once only dreamed of. Signed to the Sage Francis- helmed Strange Famous Records (SFR), WSC just released its first project under SFR’s new SFdigi platform, No Big Deal, which was produced by the late, great Ikey Owens, who was a powerhouse of talent and worked with everyone from Jack White to The Mars Volta. One of the most personal singles from the record, “Hard Out Here For A Gimp,” illustrates what she experiences on a daily basis.

“I actually wrote most of the punchlines in my notebook as jokes and thought about doing some standup with that someday,” Heffernan says. “But the day never came for me to standup and I had been meaning to write a song from my childhood friend with my disability that died shortly after another one of our childhood friends did. They played ‘Stairway to Heaven’ at his funeral and I thought that was so ironic. So I made a super dark, sad beat to make the song about him OD’ing and stairways to heaven, and how fucked everything is, but I just never could do it justice. So the song was a way for me to make a fun, more sarcastic song about the daily CripLife.”

At the time, she didn’t realize why the song was so important, but shortly after writing it, she began to come to terms with her own “ableism” and her world came crashing down, when she realized people with a disability are the last on everyone’s list of marginalized people to fight for – even her own.

“ it turned out better than I expected,” she says. “I recorded this song when I dropped the WheelGrabbers project and rapped on like 15 songs in one session. The vehicle delivery on this one stood out and I realized it’s because it’s the most personal to me. This is shit I deal with on the daily. And I’m not always great about writing super personal things, but now looking back and after performing it on the road so much with great response, I realize this is probably one of the most personal songs I’ve ever wrote about being disabled. In super glad I didn’t think too hard into it at the beginning so that it could happen as easy and sarcastically as it did.”

With No Big Deal now out in the world, the impact of the massive year she’s had is beginning to set in as she recovers from surgery after yet another broken leg. When Owens suddenly died while on tour with Jack White at the age of 38, the fact the WSC you record as one of the last projects he did is truly mind-boggling.

“It definitely makes this album more special than I thought it’d be,” she says. “It’s still a really hard and weird feeling to swallow knowing we have one of his last full production projects. I am humbled and honored beyond words.”

While some people may see Heffernan as “challenged,” the passion she has for not only music, but also social activism is awe-inspiring and she’s getting to live a life most people will never get to experience.

“Music means everything to me,” she says. “It is my everything. Sometimes it’s all I have to live for. Sometimes it makes me crazy, but I always go back to it ‘cus it’s my first language. It’s always here for me when no one or thing could be. If I didn’t have this as an outlet, I don’t know if I’d make it and if I did, I’d be much more of a hot mess. It’s mine and it’s not even a choice anymore, but I have to say it is so fucking beautiful and humbling to know that this selfish thing I do has been appreciated by so many here at home and across the world.”