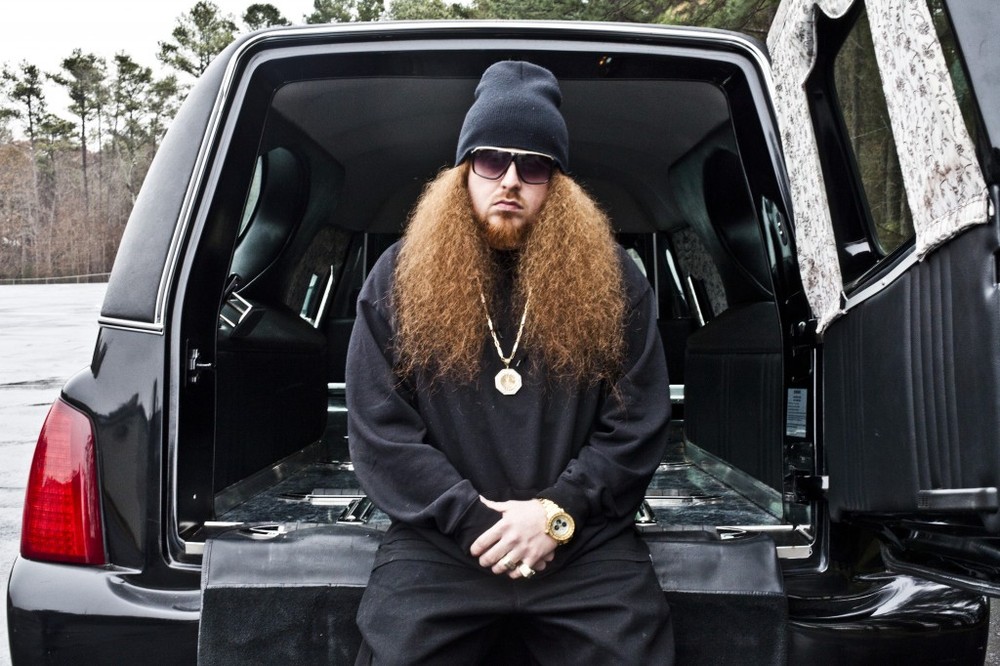 Growing up in Gwinnett County, Georgia, Strange Music rapper Rittz (real name Jonathan McCollum) was exposed to a wide variety of music, which really influenced his current musical style. His father made a living playing music for the first nine years of his life and inspired him to walk the same path.

“I grew up looking at photo albums of black and white 8×10 pictures of all the bands he was in and sometimes he’d let me sit in on band practice or setting up at whatever gig he was playing that night,” Rittz recalls. “I was always fortunate to be one of the few kids that had a ‘music room’ in my house like 4-track recorders, reel-to-reels, keyboards, guitars, and drum machines. My Dad was the main influence of me wanting to be a musician for a living.”

In high school, his friend Shortkut came up with his stage moniker. At the time, there weren’t too many white rappers in his area, so he wanted a name that would indicate he was, indeed, a white rapper.

“Back in ‘90s, when there was only a few around, you searched for a rap name that said you were a white boy,” he says. “When Shortkut said, ‘What about Rittz?,’ I was like that’s it. It stuck ever since. I think my very first rap name was MC Red, so I’m glad Rittz came to light [laughs].”

In 2003, after winning Battlegrounds on a local radio station, his career hit a rough spot, resulting in a lull in productivity. Feeling defeated and deflated, a chance introduction to superstar rapper and founder of Strange Music, Inc., Tech N9ne, reignited a spark within him that had been beginning to fade.

“I met Tech through Yelawolf,” he explains. “The original plan was to be signed to Wolf’s label Slumerican, but he wasn’t at a point in his career at that time to really start a label up so he looked out for me and wanted to try to put me in the right hands after helping me get my buzz going. My manager and I had been looking at Strange Music, watching their movement and success, so the way the timing worked out was perfect.”

When a powerhouse like Tech N9ne invests in an artist, the co-sign alone would be enough to push someone to the next level.

“It definitely restored faith,” he admits. “I signed my contract on my 32nd birthday and finally I felt like I could say I was a real ‘professional’ rapper for a living. It was a long bumpy ride to get to that point.”

Rittz breakthrough finally came with the release of Yelawolf’s 2010 track, “Box Chevy.” Since then, he has frequently collaborated with Yelawolf, and the pair toured together on the 2012 Slumerican Tour. In 2011, Rittz released his critically acclaimed White Jesus EP and followed up with the White Jesus: Revival. Rittz signed to Tech’s label that same year and released his solo debut, The Life and Times of Jonny Valiant in 2013. It’s his latest work, however, he’s most proud of.

“I think my latest release “Top of the Line” is by far my best work and I hope to feel the same about my next project,” he says. “If you haven’t peaked successfully then you need to make every new project the one you’re the most proud of until you at least reach a pivotal point of success in your career. I definitely haven’t reached that point yet.”

With his sights set on expanding his fanbase, he just wrapped up a tour that took him to Canada, Australia, and New Zealand.

“The response and love from the fans was amazing,” he says. “There are so many people who haven’t ever heard of me, so the goal is spreading awareness and keeping the day one fans happy at the same time. I’m so grateful for everyone who gives me a listen ‘cause it’s so easy just to skip and skim over an artist these days. Right now, I have my Top of the Line US Tour starting in October through December this fall, so I’m focused on that at the moment. I’m sure when that’s over it will be album time again.”

Music is clearly something that has saved Rittz from moments of pain, struggles, or trying experiences that he’s encountered throughout his life.

“Music is my life recorded and captured in time,” he says. “It sums up all the struggles, relationships, business, success, and failures, and lessons I’ve learned growing up, and the hard work I put in of countless hours in the studio trying to make myself better. It’s everything to me. I hold it close, and I’m sensitive and protective of it, but very proud of it at the same time.”