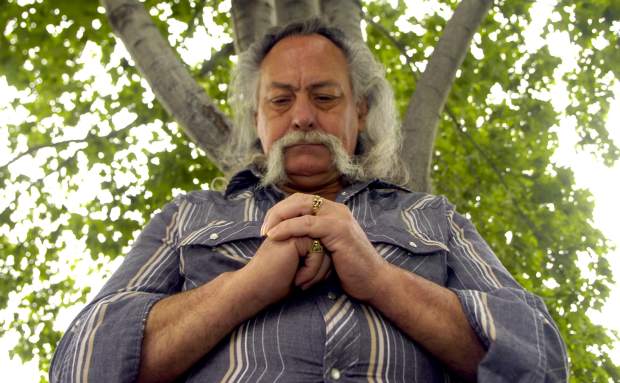 Long Time Greeley Resident Beef Sloan is the taxi-man you call when you need to ride anywhere in town, unless you call Stacey and Sassy. A few years ago, however, we at BandWagon were introduced to him when his self-published autobiography Life vs. Death came out. Yes, you can get it on Amazon and Goodreads, but there are print copies out there, which we got our hands on. The new revision of Sloan’s book, that is.

So, I should preface this review by stating that Life vs. Death Revised is full of spelling mistakes, grammatical errors and formatting faux pas. This is something Beef himself admitted to me when I met him at “Raw Beef Sloan,” a live reading Sloan put on at The Moxi earlier in the year. Despite the glaring technical faults, this is a heartfelt, charming time capsule of a book, where Sloan retells his upbringing in Greeley, a brief time in Ohio, and then his return to Northern Colorado. More specifically, it recounts the times Beef should have met his end.

“I truly believe on the day I was born God assigned a ‘team’ of Angels to look over me and keep me safe, even if that meant protecting me from myself.” From trying to catch cars near his childhood home at 11th Avenue and Cranford Place to the truck accident in 1994 that almost killed him, Sloan makes it clear that trouble, if he’s not actively looking for it, manages to find him.

At times, Life vs. Death can read almost like Garrison Keillor’s Jackass: The Novel; nothing but folksy tales of youthful, Midwestern stupidity that should’ve ended in bloodshed. As the novel progresses into Beef’s adult life, however, the subject matter gets a little more serious, such as when he was 29, he started to get the feeling he wouldn’t live past 30, which lead to health issues and a chat with a mental health professional, working past his problems over the course of four months. Tales like these give the later half of the book a bit of emotional punch, for reasons I won’t go into since it would spoil the book. I will leave you with a quote from Beef himself that can best sum up the book:

“In writing this book my mind went places I had not been in a long time. Rekindling feelings I had not felt in years. Although it has strengthened my faith in God, it has left me still searching for the answer to the why?”

Now, yes, this is a self-published book that could stand to have an editor go over it. The spelling and grammar can be distracting at times. But if you want a glimpse into the life of an ordinary man who’s survived extraordinary circumstances, give Life vs. Death Revised a shot. You can find it at www.beefsbook.com.