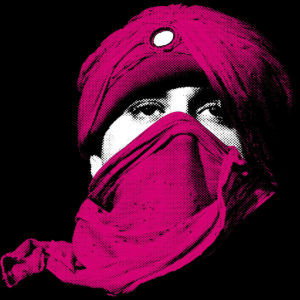 Before he was in The King Khan & BBQ Show, Mark Sultan played drums for the Canadian punk outfit Powersquat, who were noted for particularly violent live shows. After Powersquat disbanded, Sultan took over vocal duties for The Spaceshits, who also had a reputation for violent shows. They were so crazy in fact, The Spaceshits were eventually blacklisted from multiple venues in Montreal. Needless to say, Sultan has quite the history.

With all of that behind him, he started The King Khan & BBQ Show in 2004 after cultivating his one-man-band show under the moniker “BBQ.” Along with King Khan, the duo catapulted to notoriety and quickly garnered a cult following. These days, Sultan is doing a handful of intimate solo performances simply as Mark Sultan. In anticipation of his Surfside 7 show, Sultan took a few moments to talk about his many, many aliases, working with the late Jay Reatard and touring with The Black Lips.

BandWagon Magazine: You’ve been known by many different names, including Meedles, Von Needles, Skutch, Creepy, and Kib Husk. Where did all of your aliases come from and do you just go by Mark today?

Mark Sultan: I guess there are many reasons for all of the dumb names, but mainly I guess it had to do a lot with growing up listening to punk music, and always laughing at the funny pseudonyms. But with mine, it became really problematic. People don’t even know I was in certain bands.

How did you meet the late, great Jay Reatard?

I met Jay years ago, maybe in ’97. My band at the time, The Spaceshits, played with, I guess it was the Reatards, and I think Compulsive Gamblers in Memphis. We were all blown away by his ‘punkness’. But there were like 15 people at the show [laughs]. Anyhow, rock-n-rollers always ran in the same circles. I played with Lost Sounds later in Montreal, was friends with his then girlfriend Alix and him… I dunno. We were all part of the greater rock-n-roll scene and came from a time when everyone supported one another. I considered him a friend. He never actually produced any of my stuff, but he mastered my album Sultanic Verses on a massive, vulgar bender with me and King Khan at a house in Memphis. I still cherished memories of the absolute surreal anarchy of that night. And then after, when he was doing well solo, and my band ‘The King Khan & BBQ Show’ we’re doing well, we ended playing shows together, including shows in South America, where again, we went on a massive binge of partying. He was a good dude.

If you had to describe the music you make to someone who’s never heard you before, what would you say?

I think I play pretty straight forward rock-n-roll. Like very revenant stuff. I have recorded a ton of music and a lot of solo stuff people have heard is varied, but yeah, I’ve also done lots and lots of very real rock-n roll-stuff. I guess I’m just a music fan. The thing is, saying ‘rock-n-roll’ means way too many things these days. Even if I say ‘doo wop,’ people think Dion or some shit. I don’t like that stuff. Or people hear my stuff and say it sounds like Back To The Future because they don’t even know Chuck Berry. So I don’t even bother saying anything anymore.

I dunno. I really don’t care what size the place is. I’ve played big and tiny, and everything in between. I grew up with a punk ideology. I never once thought about ‘making it’ or selling tons of records or anything. I’ve been lucky enough to play for years, travel the world, and have fans. That’s success to me. I’m excited to play a small place and feel like we’re all friends sharing an experience.

I’ve met and interviewed the Black Lips a couple times. Tell me about your experiences recording with them.

They’re my brothers. I’ve known them for years. Me and Khan toured with them in 2005 or 2006 and played to like 10 people a night. It ruled. Now they do well. But they’re the same dudes. I have many stories. Recording with them was like having a party with a tape machine rolling, which is how it always should be.

What are you working on now?

I just set up my studio and label here in Germany, Chompazoid, and have been focusing on recording stuff I like, how I like it to sound.

Considering you’re from Canada, what do you think about the current political climate in the U.S.?

I mean, what can you say? Shit is cyclical. Stuff gets heavy. I love my friends there. My intention is to have fun, learn and eat. Politics—that shit is heavy here, too. It’s just the way the world is headed. I can’t stop that. But I can give my heart and soul and share a passing moment of magic with like-minded people.

Do you think music has the power to inflict change?

Bah. On a grand scale? I think the only thing music can do now on a grand scale is be a soundtrack to some kind of financial transaction. Smaller scenes—everything just seems co-opted and flat. I don’t even see an underground anymore. The same people who start ‘punk’ bands read the major label rulebook, and their goals are completely different than mine. Change is something only a collective consciousness, a universally coincidental thought can affect.

What is the most important message you’d like to communicate to your audience if anything?

That you can do anything you want in your life in your space. You can control your immediate destiny. That there is no shame in displaying your heart. That music can move people, including you. That rock-n-roll is a holy, holy thing.