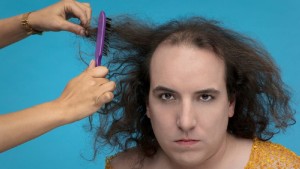 Har Mar, real name Sean Tillman, met The Strokes’ Julian Casablancas at a house party, a momentous moment in the making since leaving high school. As soon as he graduated, the Owatonna, Minnesota native moved to St. Paul, where he really started to hone his unique musical talent, which often included stripped down performances in not much more than his underwear, sometimes even less.

In 2000, he released his self-titled debut on Kill Rock Stars, putting him on the musical map. In 2001, while recording his follow-up,You Can Feel Me, he had the fateful encounter with Casablancas. He didn’t know it at the time, but that moment would eventually lead to a record deal with Casablancas’ label, Cult Records.

“We’ve been friends for probably like 14 or 15 years,” Tillman explains. “It actually started in Omaha. I was recording with The Faint for the You Can Feel Me Album. It was right when The Strokes’ Is This It came out. I was going to go back to Minneapolis that night, but they talked me into going to Lawrence to see The Strokes show. I liked that record so I wanted to see it live. There was all this backlash and I wanted to see for myself. The show was great.

“We went to a house party afterwards and I was talking to Julian for a while,” he continues. “He and Fab [Fabrizio Moretti of The Strokes] had shown up at the party. We were talking and talking, and leaning up against the wall, watching everybody as the party progressed. Somebody came by and said, ‘Har Mar, I love you!’ I always had a good following in Lawrence. Julian was like, ‘Oh I love him. Where is he?’ I was like, ‘Uh that’s me.’ I was wearing glasses and he hadn’t recognized me [laughs]. He was like, ‘Holy fu*k! I saw you play at the Mercury Lounge. He asked me to open for his tour. It was just hilarious. I was like, ‘Yeah right, that’s not going to happen.’ I met Ryan, their manager, and I didn’t really believe it, but I got a phone call two days later that I was on all the shows.”

That relationship led to a record deal with Cult Records, home to fellow collaborators Karen O of the Yeah Yeah Yeahs and Albert Hammond, Jr. of The Strokes.

“I happened to be in Minneapolis when Julian was on his first solo tour,” he recalls. “He was talking about the label as a far off kind of dream. I was recommending bands and stuff. By the time I was making my record a year or two later, I sent it to him on a whim. He wanted to do it. We were the second album they put out.”

The result was Tillman’s fifth studio album, Bye Bye 17, a huge departure from the raw, tongue-in-cheek style of “hip-hop” he did on previous efforts. That record found Tillman at his most vulnerable and most soulful. After living in Los Angeles from 2003 to 2011, he made the cross-country move to New York City. Once surrounded by the seasons and electric energy of the Big Apple, an older writing style began to scratch at the surface. Bye Bye 17 is a tale of that transition.

“As I was getting back in the seasons after living in LA for so long, I awakened a different kind of writing style,” he says. “I wrote everything on acoustic guitar like I did when I was in Sean Na Na. I guess it’s just where my voice goes when I’m playing the chords that I’m drawn to. It’s more of an independent record that I made and me sitting down and getting into my own head. I just like the kind of gloom and emotion of winter. It’s nice to have that balance.

“Moving to New York City sort of revitalized me,” he adds. “I love LA, but I was getting bored. It’s an insular place if you don’t work a job with other people. You end up not seeing anybody until nighttime for a couple hours. I was going to the same bars over and over again. Also, I had a terrible home loan so I got out of that and said, ‘Let’s go to New York.’ I like not having a car. I like not making plans and just walking out my door to see where the night takes me.”

Tillman’s sixth official studio album, 2016’s Best Summer Ever, is currently out in the world, a clear indication he’s made a comfortable niche for himself and found a family with Cult Records. Anyone that’s ever met him (or seen him perform) has nothing but kind things to say about him. He could be a friend, neighbor or that guy to just jam with on a Sunday afternoon. Perhaps that’s what makes Tillman so magnetic. He loves his job and he’s just…cool.

“When I come off tour, there’ll be the requisite three days where you lay around for a few days and watch television,” he says. “I can do that. I guess it’s easier to live in New York when you don’t work a real job and your job involves getting drunk at night.”