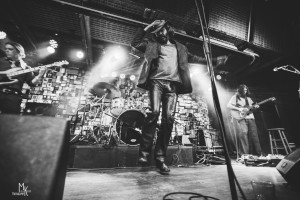 “It started with a beard, and some sunglasses and a friend saying I looked like Jim Morrison.”

Ivar Evan Sitchler is the Morrison doppelganger for Save Our City, a Denver-based Doors Tribute band coming to Greeley on May 13th. It’ll be a homecoming for Sitchler, who left Greeley in 1989.

“My first real exposure to music back in the day was when my dad would put me on the handlebars of his bike and take me to the music library at UNC,” Sitchler said. “He would pick out rock and roll records I might like and sit me at a turntable with headphones.”

His family had encouraged him to pursue music; Sitchler had played piano and tuba as a kid before getting a guitar at 15. He graduated from Colorado State University with a music degree in 1998.

“After high school, the guitar has always been a part of my life,” He said. “I decided to get serious and go to music school.  There, I had some serious sink-or-swim training in the classical guitar world. Tons of discipline goes in just to make it through a program like that. But my fellow students always inspired me and we all encouraged each other. I was very proud to get my music degree.”

So, for those not in-the-know, Doors lead Jim Morrison was only a vocalist. He didn’t play guitar. Sitchler, of course, acknowledged this.

“It’s been a strange transition from playing guitar for 30 years, and completely putting it down and being a Jim Morrison impressionist,” he said. “After the first couple of shows, we realized the audience for this timeless music is there, and there just aren’t many Doors tributes in this market.”

Save Our City isn’t even Sitchler’s first time in a tribute band. He’s also a part of Disco Floyd, a Pink Floyd tribute band that does disco remixes of Floyd’s hits. Both bands share members, with Jeph Kennedy (Guitarist) and Zach Hoffman West. (Drummer) Bassist Niek Velvis and Keyboardist Ben Rafferty round out the rest of Save Our City.

The band’s first show was a year ago at The Quixotes on St. Patrick’s Day.

“It was supposed to be only once,” Sitchler said. “We’ve had incredible shows [and have] continued to grow through some good luck at The Quixotes, Bluebird, Cervantes, and most recently our biggest show which has had the most impact in Denver, Ophelia’s.”

In regards to his May 13th show at The Moxi, he said, “I’m looking forward to a surreal homecoming.”

For more information on Save Our City, visit https://www.facebook.com/saveourcityband.