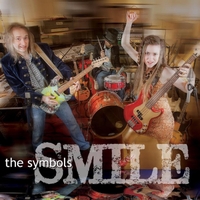 Imagine a three-piece rock band lead by a jazz/R&B singer, and that is The Symbols. Mer Sal is the lead singer and bassist, and backing her up is guitarist Jasco (yes, that’s his name) and drummer Don Stahl. The trio formed in 2010 after they all ran into each other at a Fort Collins open jam. The Symbols list among their influence Amy Winehouse, Jeff Beck, Sheryl Crow, and The Red Hot Chili Peppers, and knowing that, much of their work on Smile makes sense.

This album possesses an infectious, bouncy energy that’s conversely relaxing. You put this album on, and you smile. (I know that sounds corny, but it’s fucking true.) Sal’s high energy vocals and the guitar work of Jasco just makes you happy and chill. You can either bounce along with the music or you can relax on your couch in a state of euphoria while listening to it. I can only imagine how these guys are during a live performance. If they’re playing near you, I highly recommend seeing them live, but if you can’t, get Smile, throw it on, and just listen to it. You will listen to it again and again. If not… you’re probably dead inside.
For more information on The Symbols, visit http://www.thesymbols.net.