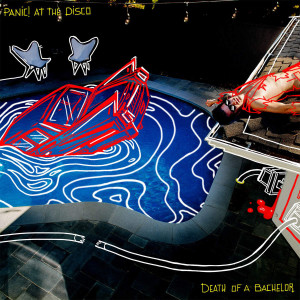 The name “Panic! At The Disco” probably rings a bell, or maybe you’re a fan of the “I Write Sins Not Tragedies” creators. Well, the band that formed in early 2004 have just released their 5th studio LP, Death Of A Bachelor. While the band that was started in Las Vegas with original childhood friends Brendon Urie, Ryan Ross, Spencer Smith, and Brent Wilson, the words “Panic! At The Disco” are now just another name for the sole remaining founding member, Brendon Urie. The album was recorded just before Urie’s marriage a couple years ago, and is now finally available for the world to listen.

I would have to describe this 11-track as a major disappointment. Urie has stated in many interviews that he is a firm believer in change, and that is what the band has successfully done throughout each record up until DOAB. The band described the sound of this record as a combination of Queen and Sinatra, while also tying back to their original sound from their debut, A Fever You Can’t Sweat Out. Luckily for them, they have managed to change their sound multiple times without completely alienating an entire audience. Panic! have changed their sound multiple times over the years. From effervescent to ‘60s style classic rock, to dark, hook-laden, synth-pop anthems in their last album Too Weird To Live, Too Rare To Die, which they took a very sharp turn from.

The goal of Death Of A Bachelor is trying to express a celebration of life changes, which the lyrics succesfully show, but the ever-eccentric, power pop duo (including Dallon Weekes) sees Urie’s powerful voice wielded like a hammer, sometimes inspiring a mild headache. Panic! At The Disco are no longer your face painted emo boys. The radio hit, “Hallelujah”, was very successful for weeks after its release towards the end of summer, but each early released single after that just got worse and worse. The songs “Emperor’s New Clothes” and “Golden Days”, are simply just fillers to the album, while “”LA Devotee” is an annoying love letter to all things Los Angeles. I can truthfully say that the only song I enjoyed off Death Of A Bachelor is “House Of Memories.” This track managed to keep the original sound of Panic! while also creating the Sinatra-esque sound the band was aiming for.

Overall, I am sad and disappointed with the final product, but I will be the first to admit that I am biased when it comes to this band, as I’ve gone the last ten years listening to and adoring the original sound of Panic! At The Disco.