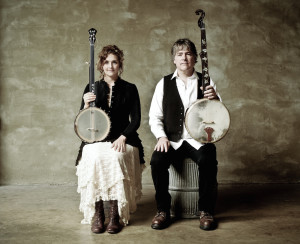 Bela Fleck’s love affair with the banjo began after hearing the theme song of the 1960s classic television show, The Beverly Hillbillies. He didn’t know what the instrument looked like at the time because it wasn’t pictured during the show, but whatever it was, he knew he had to get his hands on one.

“Something about that high tech but primitive sound really grabbed my attention,” Fleck explains. “I’m still trying to figure out why, since I was a New York City kid with no connection to folk or country music.”

That’s just how he was. Nothing about him was really “typical,” not even his name. Born Béla Anton Leoš Fleck, the 57-year-old Grammy Award winning artist was immersed in music from the very beginning. His biological father named him after Hungarian composer Béla Bartók, Austrian composer Anton Webern and Czech composer Leoš Janáček, and his stepfather was a cellist.

“I did get some classical influence around the house,” he says. “I enjoyed hearing that music, but didn’t really connect with it at the time. It didn’t seem to have anything to do with me personally. Later on, it did.”

After receiving his first banjo as a gift from his grandfather in 1973, Fleck enrolled in New York City’s High School of Music and Art, where he studied the French horn, and studied the banjo under world-renowned banjoist Tony Trischka. After graduation, he went to Boston to play in the group Tasty Licks, which included Jack Tottle, Pat Enright, and Mark Schatz. He also released his first solo album, 1979’s Crossing the Tracks, and ventured head first into progressive bluegrass composition, blind to the risks of being in the music business.

“I was so intensely focused on the music itself that I didn’t even consider practicalities until high school ended and I found myself looking for work,” he says. “I used my enthusiasm as a buffer to avoid thinking about the realities of the music life. By the time it had occurred to me how risky it really was gonna be, I was totally committed and making a living.”

Not only did he succeed in making a living, but he is considered one of the most prolific banjo players in the world. Over a dozen solo albums and 14 Bela Fleck and the Flecktones albums later, he’s reached another milestone in his life: making music with his wife. Fleck met fellow banjoist Abigail Washburn around 2007 and eventually married. They have one son together who is jokingly referred to as the “Holy Banjo Emperor.”

“The Emperor can do whatever he wants, but we do like it when he plays his little uke banjo and sings,” he says.” At the moment, his primary focus is golf. We don’t understand it.”

In between visits to the golf course, Fleck and Washburn managed to record an EP together titled Banjo, Banjo, receive two more Grammy Award nominations and set up a massive North American tour. It seems Fleck has finally met his match.

“It feels truly great to get on stage with your life partner and have a blast with a room full of people,” he says. “When we come off, and we know we have really turned them on, and made them laugh as well, we can look at each other and feel proud. Also the chance to travel together as a family, and bring our little golfer everywhere with us, is living some kind of dream. It’s pretty amazing.”

Whether they win the Grammy or not, there’s a sense they’re beyond awards and accolades. The most important achievement of their life together is clearly their son.

“I think winning a bunch of them has changed things more than any one of them since the first one,” he says. “When the press can say I’ve been nominated X many times, and won X many Grammys, it makes it sound like you, the audience member, ought to come to the show. It’s not made me a less egotistical banjo player. It took having a son to do that.”

Last year also took him to the Telluride Bluegrass Festival, a long time tradition for Fleck. He talks about the love he has for the spirit of the audiences in Colorado, which keeps him coming back.

“There’s a serious pioneering spirit,” he says. “At an outdoor show, you know the weather is not going to repel anyone and that people will show up ready for the elements. And folks like that tend to like the adventurous, but earthy music I like to get involved in.”

The moment Fleck gets the instrument into his hands and starts to work his magic, it’s easy to get memorized by his undeniable skill. In fact, he even has a hard time describing how much it means to him.

“It’s been my reason to live,” he says. “It’s the thing I’ve cared the most about, in different periods in my life. Now it’s rightly taken a back step, to make my family number one. It’s taken me from there to here, and here is pretty great. I love playing music with all of the wonderful musicians I am fortunate enough to interact with, including Abby. And the banjo is still the best instrument ever.”