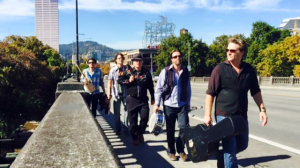 When Ft. Collins’ Americana band Lunde Station travelled to Portland, Oregon in October it was not to waste time. The point of the trip was to film a music video to their song “Burnside Bridge” on location and with only three days for the whole trip, they had a lot to get done and not a lot of space to do it in.

“Burnside Bridge” was written by vocalist and rhythm guitarist Erik Lunde about his time living in Portland during the late ‘90s where he would often find himself walking home late at night underneath the same bridge the song takes its name from. Lunde wrote the song in a flurry at the time, then he shelved it for almost ten years until he formed Lunde Station in Ft. Collins.

“A lot of Erik’s songs are a little more dark and I was like ‘we need a song that’s a little more upbeat,’” says percussionist Ryan Lennarston. After looking through Lunde’s extensive back log of original songs, “Burnside Bridge” stood out and would eventually form the basis for their EP Another Country. “Sonically, I was interested in creating a late ‘60s early ‘70s musical vocabulary,” says Lunde.

Focused on getting the video shot in their time frame, the guys knocked out all the filming in one day. Using only an iPhone and the expertise of some very skilled editors, Lunde Station perfectly captured the essence of the song with a final product that is light-hearted and fun.

The real gem to come out of their trip though was the pit stop they made to the recording studio Type Foundry. Wanting something more than just the raw footage for their video to take home with them, they booked six hours in this legendary studio with producer Adam Selzer. Selzer has worked with an incredible list of musicians including M. Ward, She & Him, and The Decemberists just to name a few. On top of that, he happened to be the bus boy of the bar Lunde worked at during his time living in the city.

Once again on a time crunch, the goal entering the studio was to showcase what the band was capable of live. “Water From Stone” is the band at their most epic. What begins with the familiar folk style of previous Lunde Station work soon explodes with southern rock licks and heavy percussion. This single is Lunde Station at their best.

The finished product is professional and solid. Selzer’s production makes the track shine and unlocks a sound the band seems meant to have. If they could get ten more like “Water From Stone,” they would have an incredible album. Say what you want about Lunde Station, but they work well under pressure.