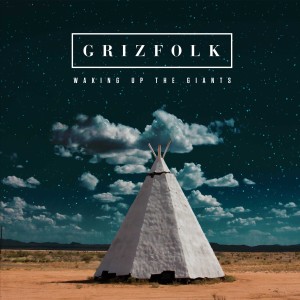 Grizfolk, a five piece indie rock band that hails from Los Angeles have just released their highly anticipated debut album, Waking Up The Giants via Virgin Records. Grizfolk released their first EP From The Spark in early 2014, giving the world a taste of the talent that exudes off them, hence leaving their fans to wait almost two years to hear the rest of these divine songs. Chances are, the names Bastille, Haim, and X-Ambassadors ring a bell. These bands have taken the music world by storm, and all have one thing in common; Grizfolk has supported them all at least once on various tours (Bastille has asked them to accompany them for three different tours). This is about to be your new favorite band, as Waking Up The Giants is one of the most promising debut albums to start off the new year.

Here is an album that successfully melds together folk, electro-pop, and indie rock in a way never done before. This record is a journey of emotions across diverse soundscapes and will leave one feeling pure nostalgia.The album starts with the song “Into The Barrens”, a varied and cohesive addition to the debut. Next from the twelve-track recording is “Troublemaker”, one of the first songs off the album to be released as a single over the summer, giving us a taste of what to expect from the final product. While the beginning instrumentals intertwine guitar and synthesizers in an alluring way, Adam Roth, lead vocalist, transitions into  softer lyrics; the rest of the song is considered to be an indie rock anthem that will leave one dancing and singing through the whole tune.

Many songs on Waking Up The Giants are singles from their debut EP, including “Hymnals”, “The Struggle”, “Waiting For You”, and “Vagabonds.” These songs are extremely diverse in sound, yet they all manage to be passionate and hypnotic anthems. “Hymnals” and “The Struggle” both give more of an indie-rock sonancy, while “Vagabonds” plays between soft percussions and warm, synth-pop piano. Next up, another early release for Grizfolk, “Bob Marley.” Sadly this song was a bit of a disappointment for me as the awe-inspiring, ‘70s inspired instrumentals in the beginning of the song were extremely deceiving, as they transition into an obnoxious, basic pop chorus. Fortunately the last of the songs were as incredible as the band themselves. The title track is an indie-folk anthem, and “Cosmic Angel”, the last of the early released singles, is a beautiful love song featuring an engaging acoustic intro. The album ends as strong as it started with “Wide Awake”, an epic synth-pop finish to the debut.