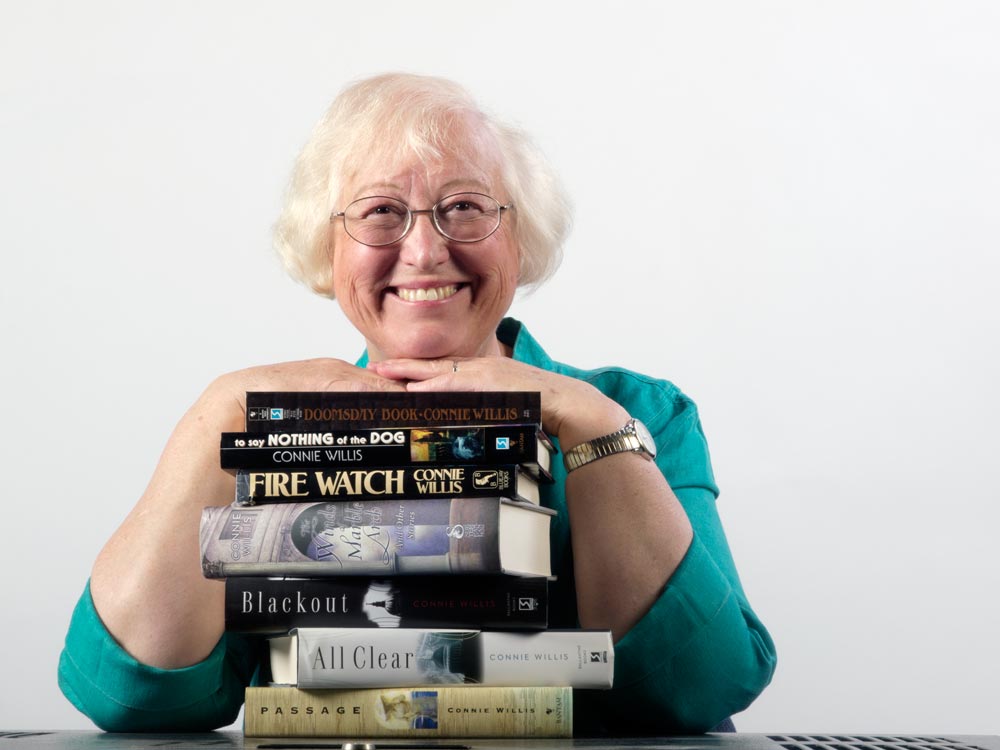 Willis is an award-winning, Greeley-based science fiction author responsible for 1992’s Doomsday Book. She grew up with “girls’ books” such as Little Women and Anne of Green Gables, but eventually discovered the work of sci-fi author Robert Heinlein and fell in love with science fiction. Soon, she had devoured all the science fiction she could find at her library, including The Year’s Best Short Story Collections.

“They were wonderful,” she says. “I got them even more than Heinlein. I think that was what converted me to science fiction, because you had all these very different writers doing a whole variety of different stories. I was just completely blown away by how many different things you could do with science fiction, and it wasn’t one kind of story, it wasn’t one kind of character. You could do almost anything.”

Willis says she was completely convinced that she wanted to write science fiction, but not novels.

“I still want to write short stories,” she said. “I spent the first ten to fifteen years of my career writing exclusively short stories.”

Despite her interest in just writing short stories, Willis eventually published her first novel Lincoln Streams. She said she was backed into it by her writer’s workshop.

Since 1980, Willis has been regularly published with a majority of her work focusing on time travel, particularly a series of her books focusing on a distant future Oxford that sends historians back to certain time periods for research purposes, such as World War II and The Black Death. When she first started writing, however, time travel was considered a dead genre.

“Time travel has been a part of science fiction from the very beginning,” Willis explains. “It had been very popular in the 1940s and ‘50s and then it kind of died out, and so when I wrote Fire Watch, nobody was writing time travel, so that was a very different kind of thing. When I took it to workshop, everybody said, ‘Time Travel is dead. This is ridiculous. You can’t write a time travel story. They’re dead.’ I’m like, ‘Well, it won’t be dead after I write this one.’”

Willis says that a ton of authors do follow trends, such as zombies and vampires, but she personally thinks it’s a dead end for writers, adding that trend-followers publish faster but also die faster.

“All you have to offer is your own personal view of the world and your own unique thing,” she says. “I think the most successful writers are the ones who follow their own star. There are millions of ideas that float past you everyday, all the time. But it’s the ones that emotionally grab you I think are the ones you should be writing about, and if you’re emotionally grabbed by it, then your readers will be.”

Willis also mentioned another dead-end for writers: e-books and self publishing. While Willis is a fan of e-books, she is not into self-publishing or self-published works.

“I think people think of it as a short-cut,” she says. “They’re not edited. I don’t know if you read self-published things, but they’re terrible. They need editors, and they need copy editing, obviously, for grammar and punctuation and spelling. I was at a library conference that had millions of these self-published authors. There was an 18-year-old girl there who had published her fourth novel, and she was like, ‘You should really buy it, it’s really good.’ I was like, ‘No, it’s not, without even looking at it because you’re 18-years-old.’ And maybe she’s a genius, but she still needs editing. The New York Times did a piece not too long ago where they said the average amount of money made by a self-published novel, online: $753 a year. It’s a dead-end for writers.”

Willis recommended starting in short stories, submitting to magazines, both print and online.

“I know people who only write novels and they’ve sold their novels. It’s hard to sell a novel without being agented,” she says. “There’s lots of way to get noticed. If you are good enough, you will be successful. If you are good enough, they won’t be able to ignore you, whatever the system is. You have to focus not on the selling, but on the writing. The writing has to be the main focus.”

For aspiring writers interested in seeing Willis in public soon, Willis will be teaching a writer’s workshop on plotting for ReadCon, hosted by High Plains Library, at Zoe’s Suite 100 on September 12 from 3-4 p.m. For more information, visit Willis’ blog at http://www.sftv.org/cw/.