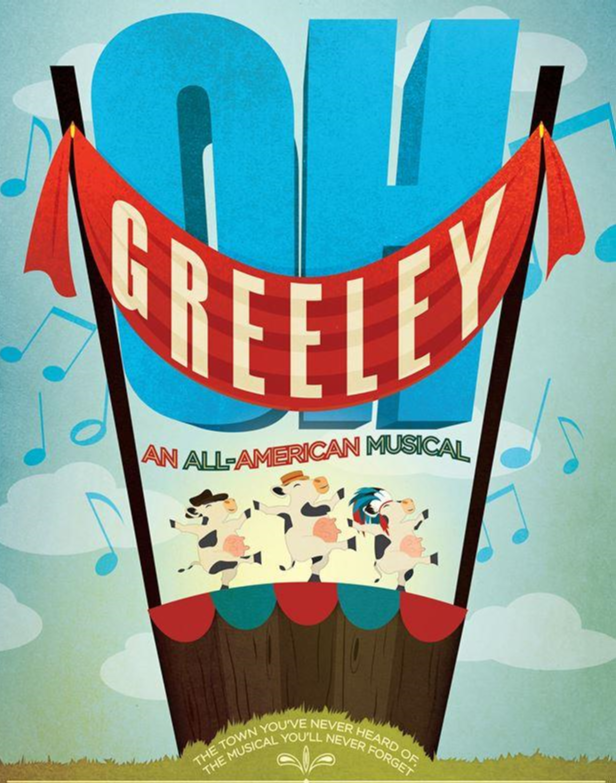 For those who call Greeley home, we’re frequented with questions as to either why we live here or disinterested remarks about “the smell.” Those looking in from the outside have raised eyebrows in interest of what has become of Horace Greeley’s pioneered town, but director and local playwright Daniel Mothershed said it best when he pointed out the influx of residents and cumbersome natives to Greeley that share a genuine attitude towards their town.

“Clearly there’s something happening here that is worthwhile, so let’s talk about why we like Greeley,” says Mothershed and thus emerged a production about just that–Greeley.

Repeated in a quote, this sounds unintentionally cheesy and was far from the original vision for the show Oh Greeley! An All American Musical. It seeded from an eye opening visit to Greeley’s historical museum and playful musical banter about Prohibition. Under the company and troupe of Cheaply Intellectual Theater, Mothershed, Eric Long and Shane White compiled their historical interests and gave birth to a hilariously entertaining and witty production about the town.

“Originally it was just us being fans of history,” Mothershed said, “then when we were looking for a structure for the show we thought the show could begin with the thin outer shell of what everybody thinks Greeley is known for and we’ll make fun of that, address the elephant in the room, or in this case the cow in the room (laughs), right off the bat so that we can move into the actual history of it.”

The musical parades through historical dates and delivers a sarcastically reverent dialogue about Greeley’s foundation. The Vaudeville comics give life to figures such as Nathan Meeker, Horace Greeley, Rattlesnake Kate, Warren Monfort and A.F. Ray. They address the conservative undertone of Meeker’s Temperance values that united the settlers of Greeley, and fantastically personify Garden City as the distant and antagonizing villain to these values. From a critical standpoint, it unintendedly edges on being grandiose in its view, but it’s comfortably between stating the facts and making a statement about Greeley.

“I kind of just saw everything as a big picture and deconstructed it that way,” says Mothershed.

The musical highlights an evident fact that Greeley’s history has been cautious and formulaic through times of prohibition and cultural change. Never really at the forefront of change, but never pushing it under the rug completely. This caution towards-anything-new attitude did inform the show a bit yet it didn’t hinder the transformative outcome of Greeley’s booming existence today. The writer’s cleverly taglined the show ‘a town you’ve never heard of, the musical you’ll never forget,’ but outside of sarcastic intent they know the idea of Greeley’s vague relevance is being challenged by its residents and the growing community.

“Cool things are happening in Greeley, we just have to wait it out.”

Without reading too much into the show, because it’s not intended as a groundbreaking revelation of Greeley’s place on the map, it’s informative, cleverly entertaining and painstakingly obvious, much like it’s title.

“You should say it in the same way that you would say ‘Oh Grandma,’” Mothershed described Long’s delivery and explanation of the title. “Like if she says something a little bit racist, but she won’t quite understand it if you explain it to here so it’s just, ‘Oh well.’ It’s said with a little exasperation, but a little bit endearing at the same time.”

Oh Greeley! An All American Musical returns to the Moxi Theater Friday July, 4th for an encore performance. Doors are at 6:00pm.