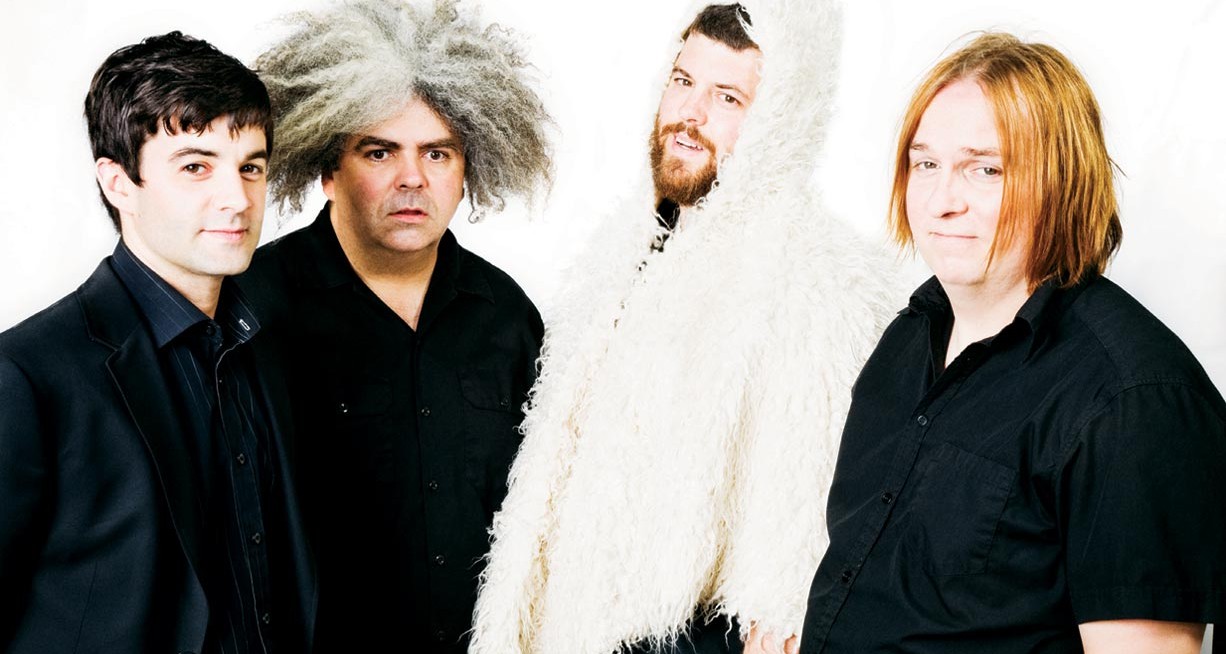 Before Nirvana, there were the Melvins. Lead singer/guitarist Buzz Osborne has been at the helm since its 1983 inception. The story is not only did the Melvins inspire Kurt Cobain and Nirvana’s first album, Bleach, but apparently Osborne is responsible for their very existence. Born in Montesano, Washington, Osborne grew up 10 miles away from Cobain’s hometown of Aberdeen. It was only a matter of time before their strong love of music and desire to escape their hometowns put them in each other’s paths. In fact, they eventually attended school together and Osborne played bass in Cobain’s first band. Osborne, along with the rest of the Melvins, knew all of the members of Nirvana. When Dave Grohl’s first band, Scream, fell apart, he asked Osborne for advice. In response, Osborne introduced Grohl to Cobain and bassist Krist Novoselic. While Nirvana went on to their own thing (we know how that story ends), the Melvins continued churning out albums. Beginning with 1987’s Gluey Porch Treatments and culminating with 2014’s Hold It In, they’ve released over 20 albums. To say Buzz Osborne is a legend would be an understatement. He’s made waves recently because of his scathing review of Nirvana documentary, Montage of Heck. Osborne discusses his feelings on the documentary, producing the Cows last album and fried chicken.

BandWagon Magazine: Most bands don’t attain the kind of longevity the Melvins has. What do you think is the key to your staying power?

The key to your success…

Sure! That sounds good.

Does it give you the power to play?

It gives me the power to do everything. There’s nothing I can’t do with fried chicken.

Making music in the ‘80s and ‘90s was obviously much different then it is today. What do you think has changed?

We’re just happy to be able to do anything at all. That’s all good.

I sometimes wish it would go back to the way it was.

I’m not a good ol’ days kind of guy. I think we should roll with the punches, whatever they may be. Maybe if you start looking at in a way that has nothing to do with the good old days.

I like that one of your favorite albums is Run-DMC’s Raising Hell. What have you been listening to lately?

On the drive today, we listened to The Humans, Miles Davis, Tom Waits, Joan Baez and Bob Dylan.

My friend who is a huge fan of yours told me you’re tough in interviews. But I said if I can handle Morrissey, J. Mascis and Bryan Ferry, I think I’ll be ok.

Well, I’ve never heard of any of those people [laughs].

I have a slight inclination to believe you’re lying [laughs].

Are those people musicians?

In fact, they are. Maybe you’ve heard of The Smiths.

[Laughs] No. Did he get that out of the phone book?

He just opened it up randomly and landed on it. Your wife does a lot of your artwork. How has it been working together over the years?

We’ve been married about 20 years. That’s a long time. It’s a long time to do anything. I like to think that we are married to each other because no one else will have us.

How did you initially meet?

She didn’t really know anything about our band, which in hindsight, I kind of found attractive. That was good. I didn’t think about it too much. We met through mutual friends so she wasn’t a fan to begin with. She didn’t have that working against her. I just thought she was smart and really beautiful. It was good. Nice combo.

I also read you’re very into film. Have you ever scored a film and would that be something you’re interested in doing?

I’m not super interested in it. Under the right circumstances I would. I don’t know how much I could handle a ‘work-for-order’ kind of thing, someone telling you what to do. Some director like Tarantino going, ‘I want you to make it sound more like the theme for Borat.’

How did you meet Mike Patton and how did you end up on his label?

You’ve collaborated with so many people. Is anyone on your radar now?

We’ve asked lots of people who will remain nameless who didn’t want to do it. I don’t want to queer the deal…

Who have been some of your favorites?

Jim Thrilwell off the top of my head. That was great. Mark [Arm] from Mudhoney.

Did you have familial influences growing up in terms of music?

Oldest kid and my parents had no interest in music. I knew nobody that was cool to show me anything so everything I found was on my own. Where I grew up was detrimental and horrible. There’s not one redeeming social value about it that I could even ever get behind. I’m here by the grace of my own ability to search out things that were cool. Other than that, my town did me no good and I’m surprised I got out of there alive. Omaha would have been a veritable paradise compared to where I grew up. It would have been a ‘shangri la’ compared to it. I’ve been out of there for a long time. I’ve been living in California since ’86.

I am going to see you in Denver because the night you are playing Fort Collins is the same night I’m seeing Morrissey, you know, what’s his name.

I’d rather take a bullet to the head than see that show [laughs].

I’m getting paid so I figured why not?

I would go if I got paid.

You produced the Cows last album. How was it to be behind the scenes this time?

It was really good. They are one of my favorite bands. That record was really, really great to do and they were all fun to work with. I got them to do things they never tried before. I don’t get a lot of offers for that kind of thing so it was nice to be able to do that. Most people are too afraid to turn me loose on their music.

How sick of hearing about Nirvana are you?

I understand it. The thing that gets tiresome is they don’t really want to hear my answers.

I do. I loved the review that you wrote about the documentary. I see nothing wrong with it. Were you shocked they didn’t approach you?

No, I’m never shocked by anything that happens with the Nirvana camp. That’s part of the problem I have with all of it. It would be shocking if they wanted to include me.

I would say that’s exactly what they wanted to do. If people want to watch a documentary about mostly things based on fiction, that’s what they get. I bet you anything it will win an Oscar.