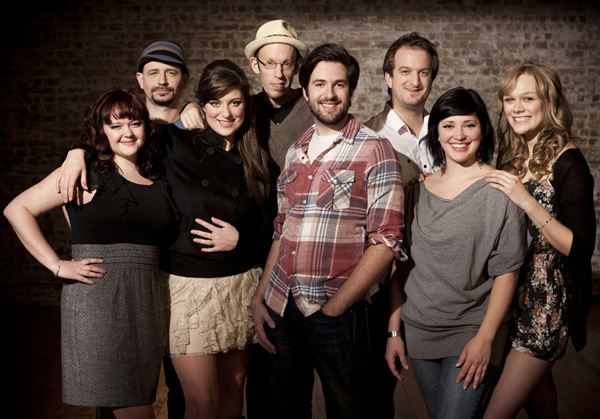 Recently, a viral video surfaced of a construction worker boarding a crowded subway train. He starts beat boxing, using a cardboard coffee cup to amplify the sounds coming out of his mouth. After some bewildered stares another passenger starts singing. And then another. And another.

This wasn’t an amateur flash mob by university students. It was an expertly executed a cappella arrangement of “Soul Bossa Nova,” the main theme from Austin Powers, sung by the Swingle Singers. While music editors and record stores are quick to give the septet a vocal jazz label, their repertoire and genre-bending skills have set them apart for nearly six decades. 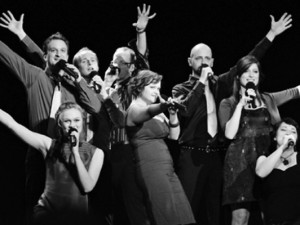 The group has a long history of mixing genre’s that traditionally don’t belong together. Their first album, Jazz Sébastien Bach, was recorded after American-born Ward Swingle gathered a group of Parisian session singers to sing some of Bach’s keyboard music. The resulting music featured vocal arrangements of Bach’s music over a jazz rhythm section of upright bass and drums, which led to a Grammys for Best New Artist and Best Performance by a Chorus, as well as a Grammy nomination for Album of the Year. Now based in London, the group’s flexibility has granted them performing opportunities ranging from collaborations with the Modern Jazz Quartet to soundtracks for “Sex and The City” and “Glee.”

When we spoke with bassist Edward Randell, he took time to explain to BandWagon that with such a wide and diverse range, the audience is ultimately what dictates the concert repertoire.

“Since the very first album in 1963 the group’s had fun with juxtaposing different genres and moods, and we like to take audiences to surprising places. Our current show includes everything from Turkish folk to British indie to some classic Bach and Debussy. We also have a whole bunch of new original songs that we’re particularly excited about,” he said.

He continued by saying, “As a general rule, we find that the music we’re most creatively invested in is also the music we can communicate with the most passion and charisma, which is what audiences respond to above all else.”

To the music students that may be in the audience Randell had some words of wisdom, “Well, it’s a bit of a cliché, but nonetheless true: listen to everybody else, and then find your own sound.” It’s advice that has fared the Swingle Singers well.